I only knew they'd announced the Academy Award nominations on Monday because I started seeing articles like "What Is a White Man Mad About in This Oscar-Nominated Movie?"

The mad white male they're maddest about is the titular "hero" of Joker, up for 11 statuettes, the most for a single movie this year.

Ostensibly, they fret that Joker will inspire "real life violence" (which, at press time, still hasn't occurred), but the real reason — liberals never admit their true motives — is that the film concerns a disenfranchised fellow Rebelling Against the System. And while Rebelling Against the System is laudable when their kind do it, the lower classes shouldn't be encouraged to behave in like fashion, because incels, mass shootings and Trump blahbitty blahblah zzzzzz.

As The Critical Drinker observes in a peerless video essay, a comparable 1993 film unleashed nearly identical outrage in some corners — and, I would add, didn't receive a single Oscar nomination, not even a lowly "In a separate ceremony earlier this afternoon..." technical nod.

I can't speak to the worthiness of Joker, but with each passing year, this particular Academy snub looks increasingly absurd.

Yes, I really am talking about Joel Schumacher's Falling Down.

Recently laid off thanks to Clinton administration military cutbacks, middle aged and middle class William Foster (a.k.a. "D-FENS," as per his vanity plate) — played by Michael Douglas at his most Kirk-like — still commutes to his old job every day, even though he no longer has a wife and child at home to deceive: His ex, we learn later, took out a restraining order against him, and he doesn't pay child support.

When the film opens, he's stuck in a traffic jam during a heat wave when his air conditioning dies. Exasperated, he abandons his car and begins walking home through recession-wracked Los Angeles.

D-FENS encounters L.A. stereotypes along the way — a Korean store owner, Hispanic gangsters, the hustling homeless, arrogant rich white guys — and in darkly comic fashion, at first by happenstance, also proceeds to "level up" on weaponry.

At first, he (and we) rationalize this arsenal on justifiable self-defence grounds. But Ebbe Roe Smith's artisanal script lures us into a trap.

As D-FENS wonders at the film's climax (and here Douglas' line reading is superb):

NYT critic Vincent Canby noted at the time that Falling Down "will function much like a Rorschach test to expose the secrets of those who watch it."

Roger Ebert was another admirer:

"... the film is about a great sadness which turns into madness, and which can afflict anyone who is told, after many years of hard work, that he is unnecessary and irrelevant. (...) Falling Down does a good job of representing a real feeling in our society today. It would be a shame if it is seen only on a superficial level."

In fact, most contemporaneous critics were warm to the film, albeit warily. These days (as you had guessed!) not so much.

As Canby and Ebert predicted, lesser minds use Falling Down's anniversaries to rail against the film's supposed racism along with its violence, while getting in digs of the "OK boomer/white male tears" variety. These are directed at (depending on when these articles came out) Tea Partiers or Trump voters. Even Roe Smith latterly convinced himself that "D-FENS was racist, but (...) didn't know he was."

Yet when listing D-FENS' many crimes against minorities, such critics conveniently omit his numerous white victims, and his sympathetic encounters with African-Americans.

You'd think from reading these articles alone that the protagonist is the only white man in the film. Except one:

Since they can't ignore it, these writers dismiss the scene in which D-FENS kills a neo-Nazi as a limp fig leaf designed to throw off those benighted viewers unfortunate enough to be less intelligent than themselves.

Yes, it's true: the same sorts who approvingly tweeted #PunchANazi all last year can't abide the make-believe murder of a fictional one. Because reasons.

If you subtract the automatic weapons, D-FENS' famous tantrum in the fast food restaurant — while designed to echo two still-fresh massacres at Luby's and McDonald's — wouldn't be out of place in the leftoid lyrics of "Alice's Restaurant" or the faux-hippie anthem "Signs." (But I thought "words could kill..."?)

I can understand ignorant foreigners morally preening like this, but if you're an American citizen who hates guns and mayhem, yet have freely chosen to review Hollywood movies for a living, maybe check yourself?

These writers even gloat about D-FENS' job loss. An "old" white male in the military-industrial complex gets sacked? Boo hoo.

(PS: Lest you think naked enthusiasm about the coming "extinction" of Caucasian men is a recent phenomenon, check out this 26 year old Newsweek think-piece prompted by the release of Falling Down; update the proper nouns and it could have been published at the Huffington Post this morning.)

(No doubt these writers would tell D-FENS he should just "learn to code," but judging by his buttoned-down "NASA mission control" look — and actual former job — one presumes he already had.)

The redundant, disoriented (and sometimes violent) post-war male is a Hollywood staple: the future gangsters in The Roaring Twenties first meet in a WWI foxhole, and Cagney's character returns home only to discover that his promised job has been handed to another; there's The Best Years of Our Lives, of course, but also the original Ocean's 11: those embittered thieves had been comrades in the 82nd Airborne.

Fast forward to the Nineties: D-FENS has done his job so well — the Cold War didn't turn hot on his watch — that he was made redundant.

About to join him on the jobless front is LAPD Detective Prendergast, who tries to halt D-FENS' rampage. Well-played by Robert Duval, Prendergast has much in common with his prey: a "lost" daughter, a twitchy wife, and, most importantly, obsolescence — again, you guessed it: It's the detective's last day on the force. The non-violent (but no less passionate) way he deals with these same frustrations stands in stark contrast to D-FENS' fateful, fatal responses.

As often happens with films great or small that become cultural touchstones, real world events seemingly conspired to give Falling Down ancillary resonance. It was "released on the same day as the [first] World Trade Center bombing," noted one retrospective, "and two days before the siege at the Branch Davidian compound." The first known appearance in print of the phrase "going postal" has been traced to that December, where we learn it was already law enforcement jargon.

Bearing in mind that Falling Down would have been in development at least a year prior to filming, note that the "smog" in the background is in fact smoke from the L. A. riots a few miles away. It's chillingly possible that, at the moment Schumacher called out "action" on day one, Reginald Denny's skull was being crushed by a concrete block, and Koreans were shooting at looters from the roofs of their grocery stores.

In neither circumstance, by the way, were the "bad guys" white men.

Falling Down isn't perfect. The "London Bridge" musical motif is ham-fisted, and it is simply not credible that D-FENS was ever married to Barbara Hershey.

Still, Falling Down is The Swimmer with a rocket launcher, a dystopian Wizard of Oz, and no survey of 1990s American cinema, or the culture at large, is complete without mentioning this Oscar-less flick. As April Wolf notes:

"Full dissertations could stem just from the glimpses we get of a Tropic Sun billboard emblazoned with the company's 1990 tagline: 'White is for laundry.'"

The vitriol still directed at the movie, and the frequency it is "name-checked" in other media — I'm looking at you, Tarantino — are a testament to its persistent ability to compel.

Check it out here or here, and take your Rorschach test.

~Mark Steyn Club members can let Kathy know what they think of this column in the comments. Commenting is a perk reserved for Club members, so if you'd like to join in on the fun, you can sign up for a membership here. For live and in-person discussions with your fellow Club members, consider joining Mark and his special guests aboard this year's third annual Mark Steyn Cruise. 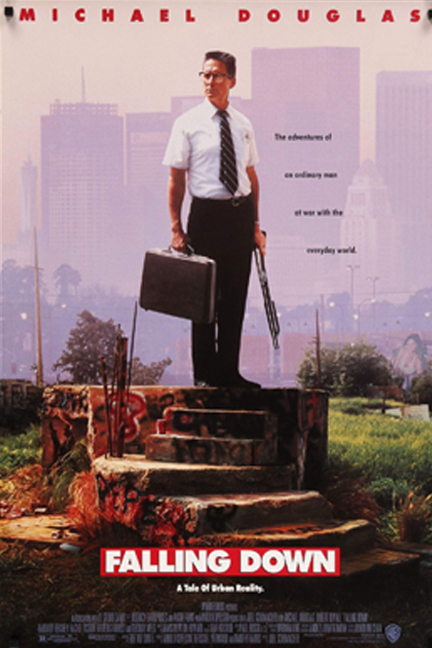