The phrase that pops up most often in reviews of Adam Carolla's 2007 low budget indie film The Hammer is "pleasantly surprised."

A backhanded compliment, but I sort of see where these critics were coming from:

Here was the co-star of the high-testosterone, low-sensitivity The Man Show, as well as Dr. Drew's wise but roughhewn "everyman" sidekick on the sex advice radio program Loveline.

And now this crude comedic caveman who ranted (with coronary-event intensity) about traffic tickets and beeping smoke detectors had written, directed and starred in... a cute little romantic comedy?

That was... actually pretty good?

The thing is: These critics had a point, just the wrong one.

Like those people you can still encounter occasionally who "hate" Rush Limbaugh or Ann Coulter, these critics were the types who "hated" The Man Show unseen. (Now The West Wing: THAT was quality television...). I doubt most of them had listened to Adam Carolla on radio for more than a few minutes, and by accident at that.

If they'd been fans, however, they'd have expressed a more nuanced reservation: that Carolla's personal storytelling style, so captivating in the intimate medium of radio, wouldn't survive the transition to film.

And indeed, The Hammer is so autobiographical that, in the hands of anyone whose name isn't "Woody Allen," it could have easily been a self-indulgent disaster. (See comic actor Jeff Garlin's contemporaneous vanity project I Want Someone To Eat Cheese With — and by "see," I mean don't, for the love of all things holy....)

What's truly "pleasantly surprising" is that The Hammer steered clear of that fate.

Those fans I mentioned before know Adam Carolla's life story by heart:

Pushing thirty, he was an ambitious but broke roofer and carpenter who taught boxing on the side. Born of a neglectful welfare mom and indifferent dad; a jock who'd narrowly finished high school and never went to college, who could barely read despite an obviously high I.Q.; surrounded by "loser friends" content with their meagre lot, Carolla knew time was running out if he was ever going to make something of his life, especially in the comedy business.

So one day in 1994, Carolla showed up in the lobby of L.A.'s legendary KROQ radio station. While listening to their "morning zoo" show, he'd heard about an upcoming boxing match stunt between the station's janitor and then-sports guy Jimmy Kimmel, and told the receptionist he was there to volunteer to train the janitor. And wouldn't leave until he got to talk to him.

Jimmy Kimmel came down the elevator instead.

Within minutes, the two bonded like long lost brothers. Kimmel pushed to get his hilarious new friend on the air. Now 55, Carolla's been making people laugh (and think) professionally ever since.

Besides starring on The Man Show and Loveline, Carolla has written New York Times bestsellers, produced TV shows and documentaries, testified before Congress about campus censorship, launched a profitable line of alcoholic beverages, driven his record breaking collection of Paul Newman race cars on prestigious tracks around the world — oh, and in February 2009, two days after getting fired from radio when the station switched formats, Adam Carolla accidentally-on-purpose pretty much invented podcasting as we know it.

So yes, The Hammer is the story of Adam Carolla — but if he'd never met Jimmy Kimmel.

On Jerry Farro's (Adam Carolla) 40th birthday, he gets fired from his construction job, then dumped by his long-suffering girlfriend. At least he still has his gig as a part-time boxing class instructor, and at the gym the next day, Jerry's asked to spar with a young, up and coming fighter.

To everyone's shock, Jerry — a long-ago Golden Gloves amateur — knocks the guy out.

Coach Bell, who's training boxers for the next Olympics, invites a dumbstruck Jerry to try out. His rival in the light-heavyweight category is a black man half his age whose needling inspires Jerry to cut weight and make the team.

Jerry's other inspiration is public defender Lindsay Pratt (Heather Juergensen), one of his boxing students, who he's fallen for hard.

To say any more will give away the, well, pleasant surprises that make The Hammer endearing. Instead, some non-spoilerish observations:

I mentioned Woody Allen before for a reason — actually, a few:

Carolla is, by any standard of measurement, a far more physically attractive man than Allen, yet he's cast an age appropriate, "normal" looking woman as Jerry's romantic interest, not a teenaged model or Charlotte frickin' Rampling.

In his most iconic, "playing himself, basically" films, Woody Allen is the smartest guy in the room. Carolla, in contrast, resisted the understandable temptation to write himself an outsized, heroic part, perhaps as a wealthy race car driver or an Emmy-winning TV star.

Instead, his Jerry is the "before" Adam, but without the drive: We learn that Jerry has pushed the snooze button on opportunities that the real Adam wouldn't have fumbled for anything.

Carolla could also have easily stuck his favorite radio rants into The Hammer and called it a script, but few pop up; even then, when Jerry makes fun of the "tourist attraction" La Brea tarpits, he doesn't sound like professional broadcaster Adam Carolla yelling into a microphone, but rather, a bright "civilian" on a first date with a smart lady who'll get his jokes — which Jerry is.

And as he did again so admirably in his second movie, Road Hard (2015), Carolla allows perfectly cast bit players to steal their scenes, and even make him look foolish.

Potential viewers anticipating (or dreading) a zany, possibly gross, warp-speed comedy a la Zoolander or Anchorman will indeed be taken aback by The Hammer. Annie Hall it ain't, but Carolla's movie is a big-hearted little gem that deserved a wider audience.

People who have seen it tend to approve heartily: note those four-and-a-half stars at Amazon Prime, pretty much the only place you can watch it.

Alas, the classification board's decision to stick this sex-free, almost curse-less movie with an R-rating hobbled The Hammer's chances at wide release, or even belated rebirth on cable TV as a beloved cult flick.

What better way to end this column, then, than by letting Adam Carolla rant as only he can (language warning) about the injustice of it all.

(NOTE: There are TWO recent boxing movies called The Hammer; be sure to check out the right one.)

Mark Steyn Club members can let Kathy know what they think of this column in the comments. Commenting is a perk reserved for Club members, so if you'd like to join in on the fun, you can sign up for a membership here. For live and in-person discussions with your fellow Club members, consider joining Mark and his special guests aboard this year's third annual Mark Steyn Cruise. 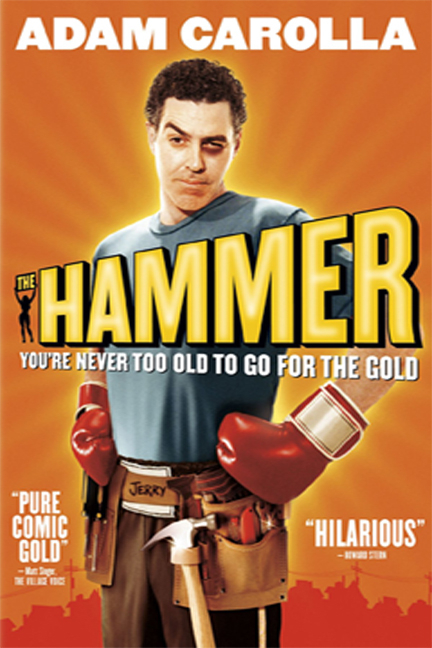