Wild in the Streets

I used to host Right Wing Movie Nights in my condo's party room. I'd rent a rear projector, and invite over other local conservative bloggers.

For our first party, I picked Wild in the Streets (1968), based on a write-up at the (now sadly defunct) RightWingTrash.com.

Democratic candidate for Senate Johnny Fergus (a miscast Hal Holbrook, at 46 an unconvincing 37-year-old, despite the Hyannis Port haircut) courts Max to endorse his campaign, but the wily younger man has one condition:

Pointing out that those under 25 now comprise 52% of the population, Max gets Fergus to promise that he'll table a bill to lower the voting age to 14.

Massive street demonstrations orchestrated by Max help elect Fergus. The law passes. But after 12 young people are killed by police during a march on Washington, Max is grief-stricken, emboldened — and quickly goes mad.

Approached by the Republicans (!) to run for president, Max wins and, among other radical moves, orders everyone over 35 into concentration camps, where they're dosed with LSD.

In the end, though, Max's loathing of anything or anyone "old" collides with our dear old friend, the Law of Unintended Consequences.

American International Pictures (AIP) had been cannily cultivating teen audiences since it invented the "beach party" genre in 1963, pivoting to edgier films like The Wild Angels (1966), The Trip and Riot on Sunset Strip (both 1967) as these ticket-buyers got older.

(By the way, that 52% statistic above was exaggerated — the reality was closer to 40%, although it now doubt felt like the former in '68 — but AIP based their production output on that "fake news," to considerable success.)

The difference between those movies and Wild in the Streets is that Wild... is satirical, mocking the very youth demographic AIP had catered to all this time, while simultaneously parodying the bungled bombs being rushed out by the major studios, which were flop-sweatingly desperate to cash in on, and come to grips with, "flower power."

You see, that 1968 was a particularly turbulent year in American (and world) history is beyond dispute: Robert Kennedy and Martin Luther King Jr. were assassinated; the North Vietnamese launched the Tet Offensive, and LBJ chose not to run for re-election; the streets outside the Democratic Convention in Chicago witnessed a bloody "police riot."

And these tensions had been building steadily since the murder of JFK, but — while acknowledging how long it takes movies to go from pitch to premiere, particularly within the then-crumbling and confused, but still extant, studio system — a quick glance at some of the films released that pivotal year exposes Hollywood's comical, almost creepy, estrangement from these epochal events:

The One and Only, Genuine, Original Family Band; Where Angels Go, Trouble Follows; Yours, Mine and Ours; With Six You Get Eggroll; Finian's Rainbow; The Love Bug; The Shakiest Gun in the West and Chitty Chitty Bang Bang.

And when the big studios did try to "get with the times," the results were what I've previously referred to as "the Great Hollywood 'Hip' Replacement": "zany," tone deaf, daisy-decal abominations like Skidoo; The Big Cube; What's New, Pussycat?; Valley of the Dolls; The Love God; I Love You, Alice B. Toklas!; bits of Sweet Charity, and all those WWII movies where Donald Sutherland plays an anachronistic hippie.

It would be years (or at the very least, many months —which might as well have been years, such was the pace of change) until somebody got around to making Joe, Medium Cool, and The Parallax View.

Wild in the Streets certainly qualifies as "hip replacement" cinema: note the requisite cameos by "big stars" like a geriatric Walter Winchell, and the soundtrack of pastiche "rock" songs by Brill Building veterans Weil & Mann. (Since the Beatles broke five years earlier, most groups had by then switched to writing their own songs — even if they didn't always play their own instruments...).

Yet it's also true that in its own eccentric, possibly accidental fashion, the movie captured the mood of (much of) the country better than pretty much any other released that year — phony "rock" tunes and all.

While it's no Idiocracy, what Wild in the Streets lacks in laugh-worthy jokes it somewhat makes up for in sheer kinesis and, particularly, prescience, foreshadowing "Yippie threats, student uprisings, China's Red Guards and the Kent State massacre," not to mention the celebritization of politics, and a middle-aged middle class striving to get and stay "hip," embodied by Shelly Winters as Max's deranged mother and her evolving hairstyles and outfits.

Maybe I'm pushing it, but watching multiple shots of Max's entourage puddled together, stoned, on his mansion's floor, I was struck by how much these tableaux evoked both the future Manson Family and their most famous victims on Cielo Drive. (One of Max's hangers-on is even an heiress...)

At one juncture, "young" politician Fergus is lectured by his teen son (who's now "part of Max's political brain trust") that dad's "New Frontier" is already old news:

"You see, you put down the Republicans, dad. That's easy. But you Democrats? You solved all your problems 30 years ago too, the same as them. There aren't gonna be any wars anymore. Not big ones. We know that. If we didn't have a foreign policy, we wouldn't even have small wars. Max feels that we don't need a foreign policy. And at home, everybody's rich, and if they're not, they can sleep on the beaches and live like they're rich anyway. There aren't even any Negros anymore, the way you Democrats seem to think. You think you see them, but I don't think I see them. All I see is a man who got out on the shore and started his tan sooner than I did."

It's a speech that wouldn't be out of place in 1976's take-all-prisoners Network, a film Wild in the Streets would even more closely resemble had it been more carefully crafted. Among other things, the sound quality is awful, and screenwriter Robert Thom is at least one standard deviation below Paddy Chayefsky in terms of IQ.

Instead, this movie gives the distinct impression that it was made on a dare — a post-modern "long con" prank, like Malcolm McLaren's "let's see what we can get away with" invention of the Sex Pistols.

Wild in the Streets is one of those so-bad-it's-okay movies that, as the cliché has it, would probably be best enjoyed on acid — or in the case of those reading this, maybe after a couple of drinks. At Right Wing Movie Night, I saw it sober, but I did eat some cranberry blue cheese I blame for making me dream I was married to Dick Cheney.

Yeah, that's how long ago it was. A lot of my guests later turned out to be timid careerist hacks, for whom "conservatism" meant being a low-tax liberal. One of these wobbled up to me as we said our goodbyes and enthused, his normally flat affect disconcertingly animated for once, "This was the greatest movie I ever saw!!"

No it isn't, for anyone. But Wild in the Streets is a fast-paced time-capsule curio, albeit with a bitter aftertaste.

Because over 50 years later, the joke's on us.

Contrary to the Twilight Zone twist at the movie's end, the (even) younger generation never got to overthrow the hippies after all:

Baby Boomers will retain their hold on most of America's tens of trillions of dollars in net wealth for the next decade, at least.

(Wild in the Streets can be watched for free on YouTube.)

Members of the Mark Steyn Club can let Kathy know what they think in the comments. Commenting privileges are among the many perks reserved exclusively for members of the club, so make sure to sign up for a membership to combat your fear of missing out. If you'd like to put faces to many of the names in the comment section, come out to our third annual cruise, which is coming up in October. This year, the Mark Steyn Cruise will set sail from Rome, with Michele Bachmann, John O'Sullivan and Douglas Murray among its special guests. 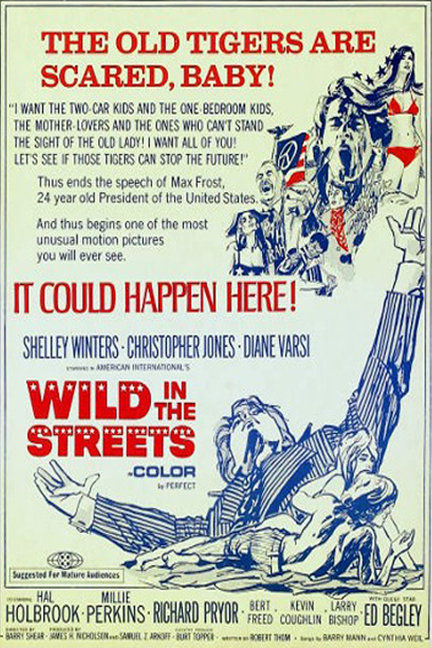