The "Blow Up Your School" Subgenre

As I write this — one month before the traditional start of the school year — a particular coronavirus-related debate burns hotter with each passing day: Should schools reopen this September or not?

I don't have a kid in this fight, and don't envy those who do. My opinions are merely those of an outsider, although that status has never stopped me from expressing myself before.

While I don't have children, I was a child once. I loved the idea of school, but the real thing was marred by the presence of way too many other children, most of whom were loud, restless, unimaginative, rude, and uninterested in or incapable of learning.

One of the pivotal moments of my life was being taken by my estranged father to see Woody Allen's Annie Hall on my 13th birthday, which he had uncharacteristically remembered. Today — perhaps having inherited this mental quirk from my dad — I can't recall the day or even the year I got married (although I do know the month began with a "J") but have no difficulty reliving the revelatory thrill of Not Being Alone In This World as this scene unspooled onto the screen.

The thoughtless lip service we pay to the high-minded, "progressive" concept of mass public education is not reflected in the broader popular culture, where the Truth (or something like it) frequently seeps out between the cracks of our unexamined platitudes.

(And even before we get to pop culture, am I the only one who's ever surveyed a typical Twitter flame war and wondered if maybe that whole "Let's teach everybody to read and write!" thing wasn't such a hot idea?)

This seepage is not even a recent phenomenon. In English public school novels such as the "Tom Brown" series, beatings inflicted by teachers and other students comprise the majority of the action. Every other Depression-era "Our Gang" short could have been titled "Skool Stinks!" without changing a word of dialogue.

In 1933, we see the first instance of what would become a thriving sub-genre decades in the future, which I call "Blow Up Your School" — works in which Tom Brown transforms into John Brown, and the children rebel. That year, Jean Vigo released his anarcho-surrealist classic, Zero for Conduct (one of the great titles in cinema.)

Zero for Conduct directly inspired Lindsay Anderson's 1968 (when else?) anti-Establishment allegory if...., which ends with public school boys shooting the place up on graduation day.

"School's been blown to pieces," Alice Cooper growled triumphantly in 1972. Then came Massacre at Central High (1976), Rock 'n' Roll High School (1979), and Heathers (1988), which ingeniously satirizes social contagions and the cynical commodification and exploitation of moral panics: in this case, teen suicide, but one can easily substitute trans-mania, global warming or, yes, COVID-19.

From The Basketball Diaries and The Craft to Mean Girls — and even the comparatively cute teen films of John Hughes (Sixteen Candles, The Breakfast Club) — high school is depicted as a prison camp with a prom. Treading the middle ground, Pump Up the Volume (1990) is about a shy new-guy-in-town creates a world-weary trickster persona and hosts a pirate radio show in his basement. His broadcasts attract a growing audience of lonely teen misfits (and popular kids who crushed by the burden of being "exceptional") — along with the disapproval of school authorities, and ultimately, the FCC.

It's a pre-internet/podcast film yet a still relevant and engaging celebration of free speech, justifiable rebellion, individuality — and, ironically, community, too. Pump Up the Volume influenced how I treated blogging when I started in 2000. Oh, and the soundtrack album is famously spectacular.

Of course, Blow Up Your School movies fizzled when real schools started getting shot up. Michael Moore won't want to hear this, but school shootings didn't start with Columbine; we supposedly peaceful, gun-free Canadians suffered from them decades earlier — maybe our popular "Burning Schoolhouse" Canada Day fireworks were to blame? — and even in America, such crimes date back to 1794.

Pre-Columbine massacres tended to involve angry parents or students targeting a particular classmate or teacher. Other than the 1979 shooting immortalized in the Boomtown Rat's song "I Don't Like Mondays," the body counts in such crimes were extremely low, sometimes zero.

Columbine changed everything, but the trouble with talking about it is that, as author Dave Cullen revealed in his highly-acclaimed 2009 book, almost everything you think you know about that horrific event is wrong. The dreadful irony, Cullen writes, is that Columbine "copycats" are imitating a "playbook" all right, but one that the media created, not the two teen killers.

(These comments by Roger Ebert, about an interview he gave on this topic that was never aired, are instructive.)

Movies "about" Columbine have been exploitative (Bang Bang You're Dead), thoughtful if flawed (Zero Day) and even (dare I say it) artistic.

What all these films (and real life crimes) have in common isn't guns, but school.

How can we blame teen angst alone? Adolescents participate in many activities: team sports, raucous parties, church groups, garage rock bands, and (once upon a time) part-time jobs. Yet I can't think of a single song, television program or movie in which disaffected teens commit mass murder in any of these settings (except for the first Scream movie).

Or in real life.

What are all these school children rebelling against? Surely not being made to learn to read, write and do arithmetic — the stated purpose of basic education — in and of themselves. Rather, they are revolting against the formal institutional "hot house" culture of schools that were ostensibly established to teach such unquestionably essential things, but had devolved into compulsory conformity factories.

Or worse — and this is their current role in society, let's be brutally honest — warehouses where children are stored during the day so their parents can go to their often soulless and stupid jobs, or just enjoy some "peace and quiet."

A child comes out the other end with a piece of paper that supposedly assures colleges he has "learned something" (and is worthy of the opportunity to get another piece of paper.) Yet we've watched literacy and other educational measurements drop steadily, the more money we throw at it.

Everyone knows this is a farce.

Few care to do anything about it, especially the all-powerful teachers unions.

It took Hurricane Katrina crushing their schools into splinters to force New Orleans to start again, literally from the ground up. They claim great success (although they would, wouldn't they? Yeah, can you tell I don't trust teachers?)

Maybe COVID-19 will be the nationwide hurricane that levels the current educational system. Homeschooling and online learning may continue to boom, thereby eliminating all the worst things about school: peer pressure, bullying, and some parents' cultivated ignorance of exactly what their children are being brainwashed to believe.

To circle back to Woody Allen: Annie Hall was the first "grown up" movie he made. Previously, his films were "the early funny ones" he sardonically acknowledged in Stardust Memories — movies like Take the Money and Run, Love and Death, and 1973's Sleeper. I'd seen them all, but like millions of viewers, I couldn't understand one particular joke in Sleeper:

Dr. Aragon: "Now this is the Central Parallel of the American Federation. This district is what you you'd probably call the Southwestern United States. That was before it was destroyed by the war."

Aragon: "Yes. According to history, over 100 years ago, a man named Albert Shanker got hold of a nuclear warhead."

Only New Yorkers of the era would have "got" it. Shanker was the head of the United Federation of Teachers, who led a seven-month teachers strike in 1968 — one that lead to considerable civil unrest.

It's funny that Allen would consider a teacher's union leader powerful enough to destroy civilization.

Then again, maybe it isn't.

Mark Steyn Club members can let Kathy know what they think of this column in the comments. If you want to join the conversation you can pick up a Club membership here and enjoy the many perks that come along with it. Kathy will be joining us on next year's rescheduled Mediterranean cruise, alongside John O'Sullivan, Douglas Murray, Tal Bachman, Michele Bachmann and Mark Steyn himself. Book yourself a stateroom and view the full itinerary here. 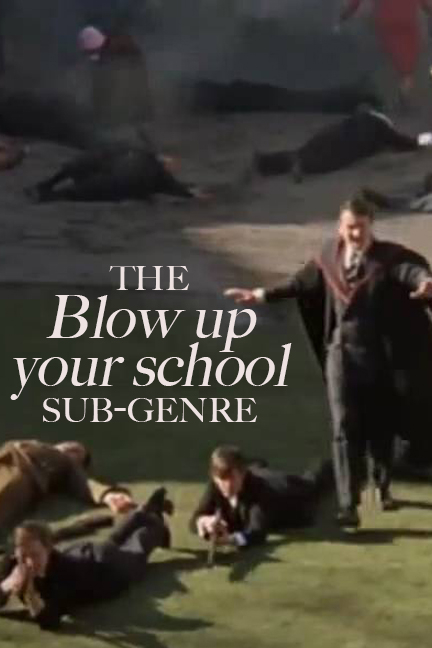