High Noon is coma-inducing — despite its "exciting" real-time gimmick, those 85 minutes feel like 200. Howard Hawk's "answer film," Rio Bravo, is a door-slamming farce without the jokes — five men running in and out, a simulacrum of "action." Shane? I don't get it. Stagecoach hasn't aged well, leading me to wonder, heretically, whether it was ever any good.

Besides today's movie, the only old Westerns that impressed me were The Searchers, The Man Who Shot Liberty Valance and the operatic Douglas Sirk-meets-David-Lynch camp classic acid trip, Johnny Guitar.

But those don't really count as "old," because they're considered precursors to the revisionist anti-Western of the Little Big Man sub-species, which ham-fistedly allegorized the Vietnam War or some such. (Don't laugh: The Shooting is about the Kennedy assassination, which is perversely funny: the Zapruder film itself — history's most argued-about strip of celluloid — is somehow less ambiguous, plus a LOT shorter...)

Which (almost) brings me to today's film:

There's a saying around our house: "Oh no, not Robert Taylor." Alright, so that's not much of a saying, but I pretty much have TCM on all day, and even my husband (who is NOT a film buff) groans when he strolls by and catches Taylor's curlicued name in the credits, or the man's unnaturally handsome face on the screen. Whatever character we're meant to think he is this time, Robert Taylor — MGM's Discount John Barrymore; a Bombay Company "Queen Anne" knock-off tea table come to (something approaching) life — virtually screams over his (actual) lines: "I got 'discovered' cuz I was so damned good looking, so here I am I guess."

Now, this is somewhat unfair to Taylor, who, besides being anti-Communist (he testified before HUAC), was, like most photogenic performers, anxious to be "taken seriously" — and sometimes succeeded.

It's 1850, and Buck Wyatt (Taylor) is reluctantly leading a wagon train of 150 women from Chicago to a California ranch: brides for the 100 workmen — strangers they've picked from daguerreotypes pinned to a board.

Why that discrepancy between the number of males and females? At the recruitment meeting, Wyatt is blunt:

"It's a long hard grind with no let-up. Rain, hail as big as eggs, breakdowns, prairie fires, sand storms. Dust storms, alkali water — no water. cholera, Indians, drowning, stampedes, stupid accidents. You'll pass graves everywhere. Milestones along the way. One out of every three of you will be dead before you get to his California Valley. So if you're smart, you'll leave by that door. That's my best advice. Follow it, now."

No one does. "All right," Buck spits. "You asked for it, you'll get it." Next, he sizes up his would-be pioneer women, all petticoats and prim hats. He gets a surprise:

However, most of the women aren't so skilled. This journey is a bootcamp on wheels: All must learn to shoot, drive a mule team, fix a wagon, turn game into grub — skills they'll need to reach their destination, then be suitable wilderness wives when they do. Make that "if": Just as Buck cautioned, not all of them survive. The next harrowing ninety-ish minutes are The Wages of Fear, if the nitroglycerin were an even more fragile and precious payload, and one endowed with the power of creation rather than destruction: women — who, despite their sheer number, we quickly come to care about.

As for the 15 men accompanying Buck and the brides-to-be, he warns them about death, too: That's his penalty for "bundling." After one hand rapes a former prostitute — "Nothing's happened to her that didn't happen before..."— Buck kills him without blinking. The surviving men mutiny and take most of the horses. The only men left are Buck and the Japanese cook (Henry Nakamura, in a pointedly stereotype-busting role) with hundreds of miles to go.

William Wellman made lots of movies you'd swear were directed by some other guy: "I thought Howard Hawks did Wings!" "Wait: Didn't John Ford make The Ox-Bow Incident?"

Inevitably for a Western, there is a lot of Ford, and Hawks, in Westward the Women. Obviously, we get "Hawksian women" by the wagon load, but Wellman (while also no commie) goes further, framing them from below in Soviet-heroic poses: jarring in any American film, never mind one from the '50s.

And if you're hoping to thrill to glorious Fordian Monument Valley landscapes, or sweeping set-piece Indian attacks, note that, "Wellman had his cinematographer, William Mellor, use filters as sparingly as possible" to give "the film an intentionally stark, sunbaked look." As for that obligatory Indian massacre, its extras are real Navajos, Utes and Piutes (not Hollywood's customary Italians and Jews.) And it mostly happens off-screen.

What we get instead is the aftermath. One by one, the women bark out a roll call of the fallen who lie twisted at their feet, their first and last names bouncing off the surrounding cliffs, then fading into final, devastating silence.

(Speaking of devastating, isn't there something especially pathetic and strangely moving about a wobbly covered wagon careening out of control and crumbling? Contestogas were such unwieldly, unlikely things: rugged, yet feeble. It's like somehow getting to observe the death throes of one of the more preposterous-looking dinosaurs...)

This bracing movie's few feints towards sentimentality are probably attributable to scenarist Frank Capra, as is the character of the Italian woman, her little son and their dog. (Noble, patriotic, earthy Italians frequent the Sicilian born writer-director's work, such as the family welcomed to Pottersville with bread and salt in It's a Wonderful Life — you just pictured them now, didn't you?)

Unlike other recent critics of Westward the Women, I won't bore you with the film's "problematic" yet "revolutionary for its time" "interrogation" of "gender norms" and sundry po-mo hoo-haw.

Even though it's all true.

The accidental theme of these movie columns, it's turning out, is "accidental" films. Between Robert Taylor and the whole Western thing (one from MG-are-you-kidding-me?-M, no less), I'd never have watched Westward the Women but for a rave review by Steve Hayes, a.k.a. "That Tired Old Queen at the Movies":

If you enjoy reading Kathy's takes on film, you'll love chatting with her live about the classics aboard the Mark Steyn Cruise. She'll be returning for our sold out voyage to Alaska in just a couple of months. We're also taking bookings for our third and not-yet-sold-out cruise down the Mediterranean. Mark Steyn Club members can also chat about these things in the comments below. Do give membership a try if you aren't already a part of the club. If you are, perhaps bring someone else into the fold by giving a gift membership. 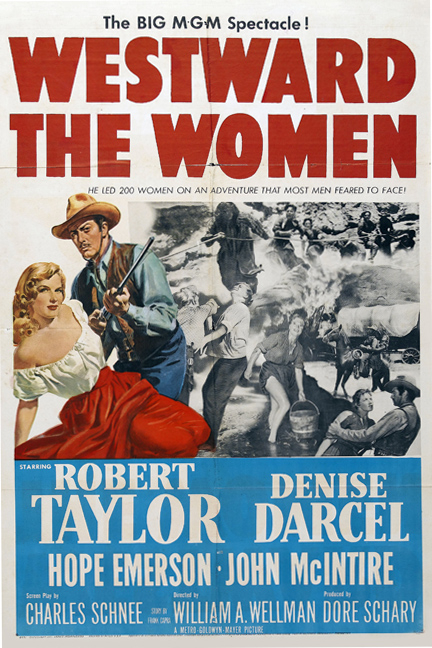