The Life and Death of Colonel Blimp

The unintentional theme of this year's movie columns has been "accidental movies": ones I watched and ended up loving, despite a slow start or homely title.

So it's fitting that today I talk about Michael Powell's and Emeric Pressburger's The Life and Death of Colonel Blimp (1943).

Based on its awkward moniker, I'd long assumed that The Life and Death of Colonel Blimp was one of those grimy, eat-your-spinach English anti-war comedies like The Bed Sitting Room and Oh, What a Lovely War. So what was it doing on so many "greatest movies of all time" (or at the very least, "Greatest British movies") lists?

Weirder still is that "Colonel Blimp" was a once-famous British cartoon character, a walrus-like blowhard spouting jingoistic clichés. His name quickly became a byword for Establishment ignorance and arrogance.

An unlikely inspiration for a superb film — until you recall that Coppola's The Godfather was based on a trashy "airport" novel, hastily written by an aging, unknown author who knew nothing about the Mafia, but was desperate to keep loan sharks from breaking his legs.

So to get a sense of what an awe-inspiring achievement today's movie is, imagine Wes Anderson — without a single ironic wink — turning Hagar the Horrible into an elliptical, enigmatic epic to rival Citizen Kane.

(...Colonel Blimp is often called "the British Kane," by the way. American critic Andrew Sarris confessed to the heresy that he thought it was better — and that particular judgement was based upon viewing what we now know was a truncated, washed out print...)

When writing about Pather Panchali, I confessed that I'd only held fast through its meandering start because I'd learned my lesson the first time I stuck ...Colonel Blimp into my DVD player:

This movie's opening scene gives off an unpromising, Chitty Chitty Bang Bang aroma. But once again, I implore you: DO NOT BE PUT OFF! That beginning will make perfect sense in the end.

Soon enough, we meet "Colonel Blimp" – the character's name is actually Clive Candy (played by Roger Livesay) — a fat, balding general, dozing in the officer's Turkish bath. A cocky young soldier rushes in to tell Candy that World War II has begun. He insults the old gent in the process, and gets more than he bargained for:

With that, we're transported back in time to Edwardian England, where young Candy meets the two most significant people in his life: his Prussian officer counterpart Theo Kretschmar-Schuldorff (Anton Walbrook), and beautiful Edith Hunter (Deborah Kerr).

Edith marries Theo, breaking Candy's heart. Throughout the film, he searches for another "Edith." He finds not one, but two...

Like a Gone with the Wind for guys — it's been known to make grown men cry — ...Colonel Blimp spans decades of conflict and peace, love and loss, with welcome helpings of sly, dry British comic relief.

Strap in for a two-hour, 44-minute cinematic rollercoaster ride: We've just finished cheering Candy's paean to fighting wars "honorably and fairly," when his now shattered (now German) friend Theo tells him that such grand principles will help the Nazis destroy the very civilization Candy has sworn to preserve. The Battle of Waterloo may have been "won on the playing-fields of Eton," but Theo gravely informs Candy that those days, their days, are gone, if they ever really existed at all:

I've lost track of how many times I posted that clip on my old blog after September 11th...

Neither pro- nor anti-war, this paradoxical movie has a military setting but not one battle sequence; a bittersweet romance about a lifelong unrequited passion, there are no love scenes, either.

Indeed, as Molly Haskell notes, in ...Colonel Blimp "calamity and loss happen mostly offstage, the eponymous commander does not die, the moments of wistfulness and longing are not allowed to linger."

Time and History plow ahead, headless of our personal, and even world-historical, tragedies; I'm not the only one who felt affronted when that goddam sun kept right on stupidly shining all bloody DAY on 9/11.

But what of the events we do see onscreen? For many of the film's admirers, its greatest sequence is the duel, about which entire essays have been written. ("My idea of perfection is Roger Livesey, my favorite actor, in The Life and Death of Colonel Blimp — my favorite film — about to fight Anton Walbrook, my other favorite actor," says David Mamet.)

Others treasure the scene in which Theo, a broken man whose own children have become Nazis, seeks asylum in Britain:

That speech is so memorable that, in 2010, a writer for the left-wing Guardian compared it favorably to one delivered by then-Labour Party leader Ed Miliband — while feeling obliged to add:

Of course, the speech [in ...Colonel Blimp] is brilliant propaganda. At the time, it spoke directly to the patriotic urge and even now, 67 years later, I defy anyone in Britain to watch it and not feel better about where they live. But Pressburger, who wrote it, didn't need to confect the feelings behind Walbrook's words. A Jewish Hungarian, he found a new life in Britain in 1935.

The very existence of The Life and Death of Colonel Blimp is a secular miracle. For one thing, it was shot (at Powell's rigid insistence) in Technicolor; in war time England, that opulent stock was exceedingly difficult to obtain, and even considered indecently, well, American.

Plus, as Powell recalled later:

I have often been asked how we managed to obtain military vehicles, military uniforms, weapons and all the fixings after being refused help by the War Office and the Ministry of Information. The answer is quite simple: we stole them.

They were forced to. Prime Minister Winston Churchill's judgment uncharacteristically faltered: he misinterpreted the script as unpatriotic (as well as a personal attack) and tried (and failed) first to stop its production, and then ban its release.

Crudely edited prints circulated (barely) for almost half a century, until the movie was, at last, re-restored (long story...) to great acclaim.

Be it by accident or design, the definitive Criterion/Scorsese edition of The Life and Death of Colonel Blimp next airs on TCM on... September 11. Some of us will just be returning from the Mark Steyn Alaska Cruise that day, but regardless of where (or how jetlagged) you'll be, this movie is worth making time for:

Beneath The Life and Death of Colonel Blimp's nostalgic, sumptuous fairy tale surface lies an unflinching yet endlessly entertaining examination of what it means to be an honorable, civilized man, when that very civilization is, despite all your costly (and literally scarring) sacrifices, dying before your eyes.

Kathy will be among Mark's special guests on the upcoming Alaskan cruise, setting sail in early September. If you'd like to partake in the revelry and review aboard this annual shindig, you can book a cabin for next year's Mediterranean voyage here. Join in on the year-round discussion with a membership to the Mark Steyn Club. 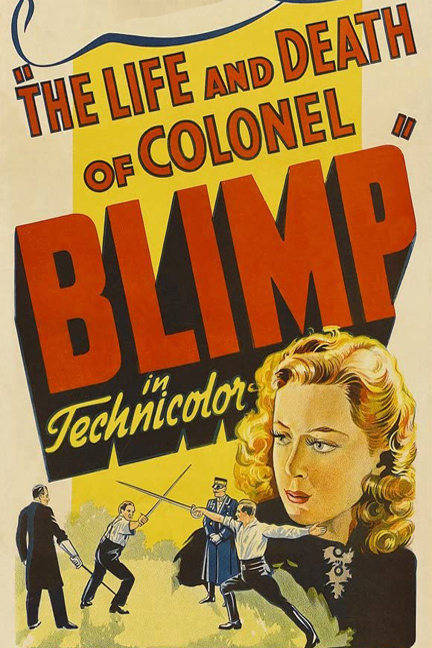