"Stendhal Syndrome" is the phenomenon's official name, but I prefer what one wag at Psychology Today dubbed it: "Having an Art Attack." Routinely afflicting tourists in Florence, Stendhal Syndrome is triggered by exposure to artistic masterpieces, leading to, as its namesake noted, "a sort of ecstasy."

I experienced a similar sensation when I watched Fritz Lang's Scarlet Street (1945) for the first time, which is particularly apropos given that the film's through line is Art: its creation and commercialization, and the roles of critic, muse and suffering artist.

That seems like a lofty theme for a film noir, until someone points out the part that paintings, and portraiture especially, have played in that movie genre. (Laura, anyone? And by the way: Am I the first person to complain that that film's supposedly mesmerizing portrait of the titular mystery woman fails spectacularly to capture Gene Tierney's real-life beauty? Or was that, somehow, the point...?)

When I say Scarlet Street is a film noir, don't be misled: It isn't a detective-centered one like The Maltese Falcon or Kiss Me Deadly.

However, it is noir in style and, more importantly, in attitude: As directed by a refugee from Hitler's Germany, this movie features the kinky backstreet fatalism and misanthropy that's standard issue in noir, but which also happens to be a trademark of Teutonic filmmakers in general: Think of Billy Wilder's dingy (un)romantic comedy The Apartment or von Sternberg's grotty The Blue Angel.

Chris Cross (played by Edward G. Robinson) is an aging, lowly clerk whose miserable marriage and tedious job are only made bearable by his hobby: He's a "Sunday painter" who works on his naïve, expressionistic canvases in the bathroom (when his shrewish wife permits it.)

One evening, Chris runs into an "actress" named Kitty (who's really a prostitute, but the Hays Code forced Lang to telegraph her true profession by standing her next to a lamp post, wearing a see-through plastic raincoat — that is, she's as cheap and disposable as penny candy and its cellophane wrapper, not to mention "naked" yet clothed simultaneously).

To his own amazement, the timid clerk rescues her from a brutal attacker. Kitty (played by Joan Bennett) repays the favor by pretending to befriend him.

"Pretending" because Cross doesn't know that Kitty's attacker was really her pimp Johnny; (actor Dan Duryea — who looks like William H. Macy grafted onto Richard Widmark — specialized in these skinny, on-the-make snakes.) When Cross lets Kitty mistake him for a wealthy, famous artist, that fib inspires Johnny and Kitty to take the old guy for all (they think) he's worth.

Kitty talks Cross into renting an artist's studio in Greenwich Village (which she quickly moves into.) He duly sets up an easel and moves his canvases out of his home before his wife makes good on her cruel threat to throw them away.

A series of misunderstandings leads a renowned art critic to mistake Kitty for the artist responsible for Chris' unusual paintings. She can't very well tell the truth, and Johnny won't let her, especially when "her" paintings start commanding high prices in fancy galleries.

But when Cross finds out what's happened...

I'll leave it there.

It pains me to do so, because Scarlet Street's intricately plotted, edge-of-your-seat twists are among its greatest achievements, and I'd get a little frisson of excitement in the retelling. But that wouldn't be fair.

Instead, here are a few background tidbits to enrich your viewing experience:

First: The paintings in Scarlet Street were by noted Hollywood portraitist and degenerate-about-town John Decker, and are believable exemplars of what a gifted unschooled folk artist might create in mid-century America.

My theory is that, instructed to create pictures that could have been believably painted by either a man or a woman, Decker (an accomplished forger) consciously imitated Frida Kahlo and Tamara de Lempicka, with a little Henri Rousseau thrown in.

Second: If you're used to seeing Edward G. Robinson portraying a jumped up, snarling gangster — including, arguably, the only movie villain in history without a single redeeming quality — his performance in Scarlet Street will surprise you. He's perfect here as a nebbish who's wasted his life but will react to betrayal by unleashing decades' worth of tightly wound fury.

Incidentally (or not), in real life Robinson was an art connoisseur whose enviable collection of Picassos and van Goghs were displayed in a custom built gallery on his Hollywood property, until he was forced to hand them over to his wife when they divorced.

Third: I mentioned the Hays Code earlier; Through deft sleight of hand, Scarlet Street (sort of) got away with being the first American film to depict someone (sort of) getting away with murder. The movie was banned, briefly, in three cities, and condemned by the Catholic Legion of Decency.

Scarlet Street boasts so many subtle touches that it should be seen several times to be fully appreciated: the expression that flashes over Kitty's face when Chris confesses that he's a married man; the brief indication at the beginning of Chris's superstitious nature, which will eventually bring about his psychological downfall (which one of the most chilling scenes in a non-horror movie.)

If space permitted, I'd compare and contrast it to the 1931 French version of the same story, Renoir's La chienne (1931), and The Woman in the Window, Lang's earlier exploration of similar themes with the same cast.

Honestly, I could write a whole book about Scarlet Street. (Well, one of those slender BFI monographs, anyway.)

Should you decide to check out this movie, avoid fuzzy public-domain copies. Track down the definitive 2012 Kino Lorber Blu-Ray edition instead, which is a digital transfer from the Library of Congress 35mm negative. Amazon Prime offers both, so pick this one. The movie is in regular rotation at TCM, but no airings are scheduled in the near future.

Let Kathy know what you think in the comments below, one of many perks reserved for Mark Steyn Club members. If you haven't yet joined or are interested in getting a gift membership for a loved one, you'll find all the information you need here. 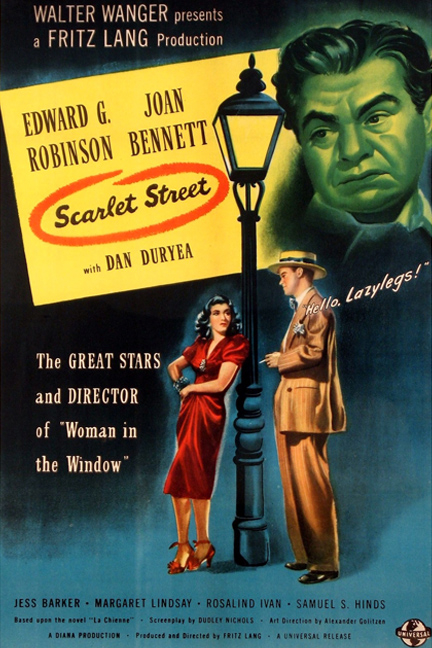