I should feel annoyed by the sheer number of articles and videos out there with titles like "Famous Movie Scenes You Won't BELIEVE Aren't CGI!"

At first glance, they merely reinforce the widespread belief that our age is historically and culturally illiterate to an unprecedented degree.

But to their credit, most of these "top 10" lists express a well-warranted wonder at the practical effects in "old movies" (i.e. "anything made before Star Wars"): the "mother-of-invention" ingenuity and sheer man-hours their creation demanded in the pre-computer era.

The films on these lists are predictably recent (in cosmic terms, if not millennial ones): the melting faces in Raiders of the Lost Ark; that "tray catch" in Sam Raimi's Spider-Man; An American Werewolf in London's lycanthropic transformations; and "Bruce" the shark in Jaws.

So I'd like to push this concept even further:

The "newest" film on my version of these ubiquitous "You won't BELIEVE!" lists was made the year before I was born...

Not all visual effects have to be spectacular. Sometimes, their purpose is to conceal something on screen, rather than show it.

Director Preston Sturges insisted on casting newcomer Veronica Lake as the female lead in this stringent satire of Hollywood — even after she confessed (once she'd landing the role) that she was pregnant.

"[Lake's] figure problems seemed insurmountable. She was short [5' 2"], like me, and very tiny — possibly the smallest normal adult I had ever seen. Her waist was the smallest in Hollywood, 20 3/4". Yet everyone was telling me to make her into a sex symbol" in "gold lame and beaded gowns," despite her condition. And after all, Head said, "you can't do a whole movie [standing] behind a muff, fan, or piano."

It helps that for about a third of her screen time in Sullivan's Travels, Lake's character is disguised as a boy hobo. And while many know-it-all modern viewers insist that her seven-month pregnancy is obvious — well, you decide:

I've often wondered if this situation helped inspire the movie Sturges began shooting the following year, The Miracle of Morgan's Creek, in which he pulled off a much more audacious trick:

Telling the story — with the strict Hays Code at the height of its power — of an unmarried girl named Trudy Kockenlocker who gets drunk with a bunch of sailors, blacks out, and wakes up pregnant... without once using the words "drunk," "sex" or "pregnant."

Half a lifetime ago, I was invited to hang out at a hip new Greek bar & restaurant on Toronto's Danforth Avenue.

The place was packed, high ceilinged and gleaming, buzzing with a youthful vibe.

The dozens of big (for those days) TV screens wall-mounted at almost every sight line was a novel touch at the time. Their sound was turned down, though, lest it distract from the booming Top 40 hits flooding the joint. It was obvious that they'd been installed as mere eye candy, to show music videos or whatever on a loop.

My friends and I had to yell at each other just to be heard, right up until we didn't. The noise in the restaurant — conversations, music, even behind-the-bar clattering — had petered out.

Because one twenty-something patron had nudged another, and so on, until everyone was silently staring up at those TV screens, which were all showing the same scene from the same old movie:

Stop motion animation pioneer Ray Harryhausen later explained how he created the "skeleton battle" in Jason and the Argonauts:

"There were seven skeletons fighting three men, with each skeleton having seven appendages to move in each frame of film. This meant an unprecedented 35 animated movements had to be synchronized with three live actors' movements; so one can readily see why it took four and a half months to record the sequence for the screen."

Fans will fight forever over which creation was Ray Harryhausen's finest. Was it this sequence?

Or the monster in 20 Million Miles to Earth, who has more personality than some human actors?

What about the destruction of Washington, D.C., in Earth vs. The Flying Saucers, which predates Independence Day by decades?

The word "iconic" is tossed about far too carelessly. In the case of Ray Harryhausen's patiently handcrafted effects, it fits perfectly.

It's been called "the inception of Inception":

Buster Keaton's master class of optical and in-camera effects has inspired filmmakers and delighted audiences for close to a century. I honestly have nothing to say about this movie that wouldn't sound stupid:

Honorable mentions? The earthquake/flood/dam collapse in 1939's The Rains Came:

Harold Lloyd's Safety Last set piece with the clock, which is even more impressive if you know that Lloyd was missing the thumb and index finger on his right hand: 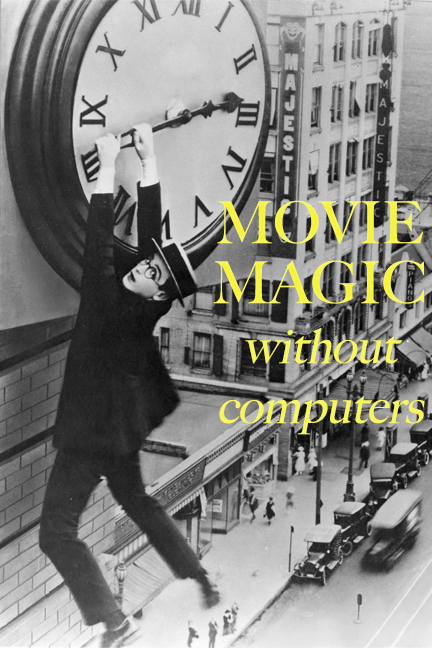