The primary theme of those movie melodramas commonly called "weepies" or "women's pictures" is duty – specifically, the doing of one's unpleasant, unavoidable duty in a dignified manner.

Watching a carnival-colored melodrama like Madame X or Back Street, with its exiled heroines (draped in "gowns by Adrian" and "jewels by Harry Winston") gazing wistfully at the French Riviera vista from their marble balconies, we might think, "How can I get in on this action?"

Okay, not always: In Douglas Sirk's All That Heaven Allows, Jane Wyman's "what will the neighbors think?" kids force her to give up Rock Hudson, then "make up for it" by... giving her a TV to keep her company instead.

But in general, melodrama makes duty seem glamorous, or, at the very least, bracingly, beautifully austere, like Shaker furniture.

Alas, as we involuntarily encounter real life opportunities to "do our duty," that promised glamor is missing.

This reality was ingeniously illustrated by the creators of TV's Frasier — whose titular character reluctantly takes in his frail, aging father – using the visual shorthand of dad's shabby reclining armchair stuck like a stubborn bunion in the middle of Frasier's tastefully furnished living room.

Make Way for Tomorrow opens with the words "Honor thy father and mother" written across the sky as if by the hand of God. However, that bizarre touch seems to belong to an altogether different film, or more like the studio's doing than the director's. (They tried without success to get McCarey to re-shoot a happier ending.) Because as it happens, the Moving Finger, having writ', moves on, dropping the movie's characters into what seems like a world created by an uncaring deity.

Make Way for Tomorrow tells the story of an elderly couple who lose their home to foreclosure and look to their reluctant adult children to take them in.

It's a ruthlessly candid film, one which I expect some viewers will find harder to watch than Hostel. Glenn Erikson observes:

"McCarey doesn't separate his characters into heroes and villains by making the 'old folks' kindly innocents victimized by unthinking relatives. Dealing with the parents isn't always easy. Old Bark knows he's not welcome in Cora's house and becomes uncooperative. Lucy disrupts Alice's bridge lessons, puts a strain on the duties of the maid (Louise Beavers) and contributes unintentionally to problems with daughter Rhoda. The problem is everyone's fault and no one's; there just seems no place for Bark and Lucy to be together. Even the understanding George and Alice are eventually compelled to take steps to remove mother from the house."

Make Way for Tomorrow refuses us the cheap grace of stock characters getting their Dickensian (or Capraesque) due.

No, nobody in this movie is eager to "do their duty," which in this instance comes without the usual melodramatic consolation prizes of jewels, gowns, or pastel views of Capri.

That said, the old couple are a burden: they're often crabby, dotty or boring, given to rehearsing their endless list of aches and pains; even in the movies, to say nothing of real life, homes simply have limited space; one's adult sons and daughters have, quite naturally, carefully arranged their lives in a particular way, and are blessed with limited stores of patience, money, flexibility, energy, and time.

There is no final redemption in Make Way for Tomorrow, and why should there be? No one in this movie is bad. They're simply human.

In the last reel, viewers are permitted only a few tantalizing minutes of relief, and even those are bittersweet. The finale casts the two helpless protagonists into a deep, lonely void where, we're obliged to conclude, we'll end up, too.

Orson Welles famously said about Make Way for Tomorrow, "My God! I watched it four times and cried my eyes out every time! That movie would make a stone cry!"

But who are we really crying for? The old couple? Or ourselves, terrified of enduring a similar fate — that of being a burden, or having to shoulder one?

You won't be surprised to learn that the movie flopped. Depression era audiences understandably preferred escapist "screwball comedies." Ironically, McCarey delivered them one of the all-time best, The Awful Truth, the same year Make Way for Tomorrow came out. The latter's failure cost him his studio contract. When accepting his Best Director Oscar for The Awful Truth, McCarey said, bitterly: "Thanks, but you gave it to me for the wrong picture."

Make Way for Tomorrow was always admired by cinephiles, despite being rarely screened or broadcast; incredibly, it wasn't even available on VHS or DVD until the Criterion edition came out in 2010. Yet it inspired Tokyo Story (1953), which some consider the greatest Japanese film, and regularly ranks among the top 10 movies of all time.

Thanks to Criterion and Turner Classic Movies, Make Way for Tomorrow is finally finding an audience.

In the very spirit of the movie itself, however, that fact isn't necessarily heartwarming news.

Today, as it has for over ten years, my 95-year-old mother-in-law's squeaky recliner sits in the living room of our not-very-big condo.

One evening years back, I noticed that she was up much later than usual. I didn't recognize the black and white movie she was raptly watching on TV, so I used the remote to get the title from the onscreen TCM listing.

As a lifelong film buff, I can name plenty of rare movies I know about but have never seen. But the title Make Way for Tomorrow, I'm embarrassed to say, didn't ring a bell.

As I researched the movie on the web, my blood ran cold. It was one of those "The killer's calls are coming from inside the house!!" moments.

Because Make Way for Tomorrow was all about my – our – living arrangement.

My discovery of Make Way for Tomorrow didn't make me a more patient and understanding daughter-in-law.

All it changed in our house is:

We bought me my own TV.

~Make Way for Tomorrow isn't currently streaming on any platform. However, the Criterion DVD is available from Amazon.

Mark Steyn Club members can let Kathy know what they think of this column in the comments. Commenting is a perk reserved for Club members, so if you'd like to join in on the fun, you can sign up for a membership here. For live and in-person discussions with your fellow Club members, consider joining Mark and his special guests aboard this year's third annual Mark Steyn Cruise. 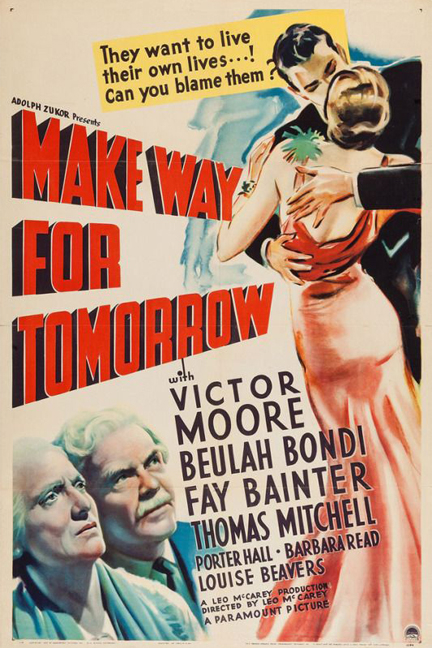