"I get over a thousand TV channels if you count my Roku. I have a Criterion Channel subscription, a bunch of DVDs still in their shrink wrap, and a pile of 'to read' books.

"So of course because it's on TCM (again), what I'm doing is watching All About Eve for probably the 30th time. #Loser."

My favorite reply was:

"Kathy, I'd watch All About Eve if my house was on fire."

Is there anything new to say about this record-Oscar-nominated story of female ambition, desire and friendship on mid-century Broadway, widely regarded as the greatest screenplay ever filmed?

I was half-hoping to dig up a plagiarism scandal at least:

That some feminist film scholar had uncovered studio archival evidence of an obscure woman writer's uncredited contributions to that lauded script.

But nope, it was all Joseph Mankiewicz's work, evidently. Well, not quite all: It's based on an undistinguished short story by Mary Orr, but comparing the two is like placing "Turkish Wizard of Oz" alongside the real thing.

I shouldn't have been disappointed or surprised: As I mentioned a while back, Mankiewicz was a man renowned for capturing the female experience on film; along with wit, he added insight and nuance to poor Mary Orr's pedestrian original:

I first watched All About Eve half a lifetime ago, picking it up at a video rental joint in Toronto's Boystown, from its perch on a shelf labeled GLAMOROUS ALCOHOLICS. I harboured unattainable ambitions to the former state, but consoled myself that at least I'd achieved considerable success when it came to the latter.

I bought my own VHS copy that week. On too many dark, lonely evenings (and the occasional sunny afternoon) I smoked and drank right along with stage star Margo Channing (Bette Davis) and her entourage: loyal factotum Birdie (Thelma Ritter); director/fiancé Bill Sampson (Gary Merrill); and playwright Lloyd Richards (Hugh Marlow) and his wife Karen (Celeste Holm), each of them subject to the barbs of warlockian critic Addison DeWitt (George Sanders), and the twisted machinations of the film's titular usurper, Eve Harrington (Anne Baxter.)

All of whom, I must point out, are briefly upstaged by up-and-coming starlet Marilyn Monroe, as chorus girl Miss Caswell:

Disappointingly, Criterion, who should know better, call this a "restoration," a word properly reserved for movies that have suffered neglect or, in the case of Pather Panchali, physical damage; "lost" films for which new negatives are painstakingly struck from the last known print, recently unearthed in some old South American theatre scheduled for demolition.

None of this applies to All About Eve, one of the treasures of the Fox vault. Rather, Criterion's is merely a 4K digital transfer. Now, a true restoration (be it of the Sistine Chapel ceiling or Abel Gance's 1927 Napoleon) aims to reveal the artist's original vision. Alas, All About Eve's unforgiving high-tech makeover has mostly unveiled something Mankiewicz and company were likely trying to camouflage — namely, Bette Davis' appearance.

It's now all too clear to a veteran viewer like me that her relatively smooth, taught face in original, older prints of this film was the result of painstaking lighting and other assists. This high-def Criterion edition not only exposes Davis' creeping jowls, forehead wrinkles and "marionette lines," it casts into high relief Davis' stubborn habit of overdrawing her upper lip and filling in her cupid's bow with lipstick. This shiny demarcation line can't be unseen.

Yes, Davis was famously willing to look old and even bizarre on screen when her character demanded it. But glamorous Margot Channing is decidedly not one such case; she isn't playing Norma Desmond in Sunset Blvd. (released, coincidentally, the same year.)

That said, it is beyond Criterion's or Mankiewicz's control that advances in sunscreen, drugstore skincare, injectables and plastic surgery mean that 40-year-old Margot/Davis looks closer to 60 to modern eyes. (PS: Desmond is supposed to be 50...)

It's all ruefully ironic, considering that All About Eve is, in part, about a woman who is naturally yet neurotically concerned about getting older.

I also heard something for the first time:

How often the humble word "heart" pops up in this brutal story, in which position and prestige are gained and lost through a sociopathic game of musical chairs:

"Everybody has a heart," Margot mutters drunkenly. "Except SOME people," and so on.

But one of those lines acquired new gravity when I watched this edition.

Upon winning Broadway's most prestigious award mere months after the start of her scorched earth campaign for stardom, Eve delivers a cloying speech drizzled with fake humility, winding up with, "My heart is here, in the Theatre..."

"Nice speech, Eve," Margot tells her minutes later, as her ex-friend clutches the ungainly statuette to her bosom. "But I wouldn't worry too much about your heart. You can always put that award where your heart ought to be."

The movie famously freeze-frames the precise moment, just before the famous flashbacks begin, when Eve stretches out her arms to accept this prize. The setting is a banquet hall that hasn't been redecorated since the turn of the (previous) century, and its Victorian clutter includes a collection of antique pistols mounted along the wall behind her.

It is most probably a coincidence – Mankiewicz wasn't a director given to symbolism or other stylistic flourishes — so I guess it's that 4K stuff I was complaining about before, maybe messing with the depth of field. Whatever the reason, I noticed something I'd never seen before after all these years:

As a beaming Eve's lifelong dream comes true, the coveted award mere inches from her grasp, one of the pistols on the wall points directly at her heart: ~All About Eve airs January 19 on TCM, and streams on Amazon Prime.

Mark Steyn Club members can let Kathy know what they think in the comments. If you aren't yet a member but wish to join in on the fun, you can sign up or get a loved one a gift membership here. To meet your fellow Club members in person, consider joining our third annual Mark Steyn Cruise next October, featuring Conrad Black, Michele Bachmann and John O'Sullivan, among other distinguished special guests. 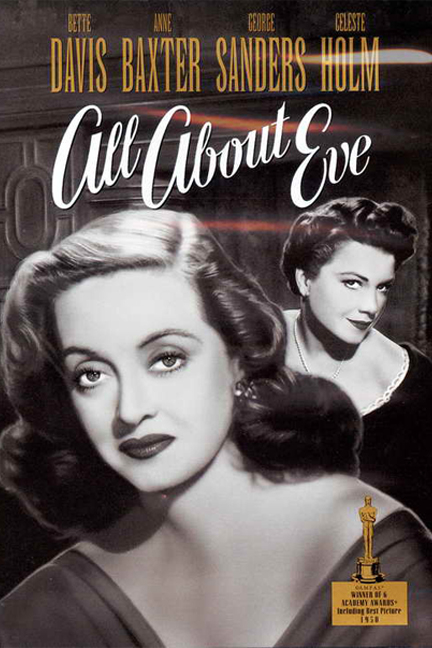