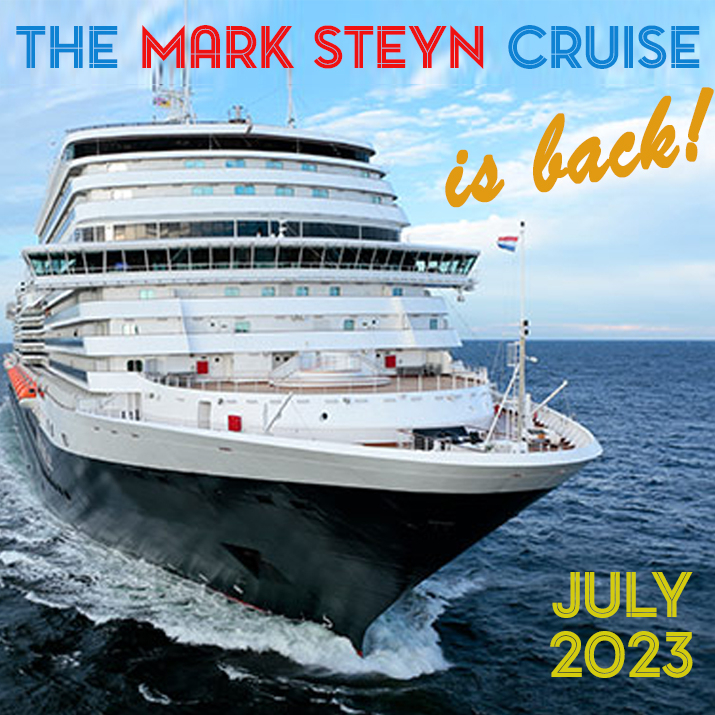 Thank you very much to those who dial up The Mark Steyn Show on GB News every evening. If you enjoy the Steyn Show on dry land, wait till you experience it at sea, as part of our first post-Covid Mark Steyn Cruise. Steyn favourites from around the world will be joining Mark aboard - among them Alexandra Marshall (from Wednesday's show), Eva Vlaardingerbroek, John O'Sullivan, Bo Snerdley, Michele Bachmann, Tal Bachman and Andrew Lawton. You can find more details here.

Wednesday's Steyn Show began with yet another act of woke thuggery from the disgraceful British police. Kellie-Jay Keen joined Mark to discuss Sussex constabulary's threat to arrest her.

Next up was David Starkey on the UK Supreme Court striking down the Scottish Government's new independence referendum, followed by Jamie Jenkins on the cost and arithmetic of the migrant tide.

We closed out the hour with Alexandra Marshall on the west's embrace of "digital identity".

All that plus your comments and questions in real time along the way. Click below to watch the full show:

We thank everyone who tuned in last night. Despite inroads from the Australian footie, we beat Sky and TalkTV combined. By the end of the hour, the Niche Canadian (thank you, The Guardian) was clobbering Rupert Murdoch's floppo flagship Piers Morgan Uncensored by over thirty-to-one - not because we had a particularly strong night, but because Piers' ratings fell off another cliff, plunging to a record low. Mr Murdoch is destroying a hard-won reputation of many decades by sticking with this fiasco.

Mark will be back for tomorrow's Steyn Show live at 8pm GMT/3pm North American Eastern - followed by the Thursday replay of Steyn's Song of the Week on Serenade Radio at 9pm GMT/4pm Eastern. You can listen to the latter from anywhere on the planet by clicking the button in the top right-hand corner here.

If you're a member of The Mark Steyn Club, feel free to weigh in below. If you're wondering what the Steyn Club's all about, you can find more details here - and we also have a great gift membership.