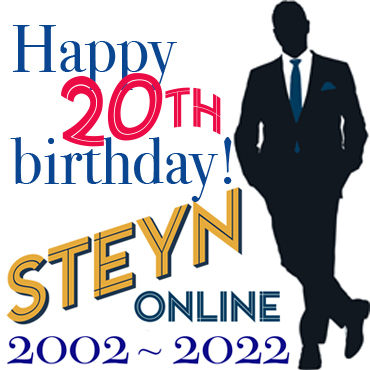 It's Steyn Online's twentieth birthday this week, and we're celebrating by getting back in the cruise biz. Steyn Show favourites from around the world will be joining Mark aboard - among them Alexandra Marshall (from Wednesday's show), Eva Vlaardingerbroek, Leilani Dowding, John O'Sullivan, Bo Snerdley, Michele Bachmann, Tal Bachman and Andrew Lawton. You can find more details here.

Wednesday's Steyn Show began with Sajid Javid's pithy distillation of twelve years of Conservatives' betrayal of their base: "So what?" Afterwards Mark explored the latest figures from the ONS of the self-extinction of the British peoples with David Starkey and Jamie Jenkins.

Next up was Samantha Smith on the sudden end to Lady Susan Hussey's six decades of Royal service, and we closed out the hour with Claire Hibbs on the government's heartless attitude to victims of the Covid "vaccines".

All that plus your comments and questions in real time along the way. Click below to watch the full show:

Thank you for all your kind comments about our twentieth birthday. Joel Long, a Steyn Clubber from North Carolina, writes:

This compilation was informative and entertaining as well with many prescient words from the past.

Joel adds that his two favorite Steyn moments in recent years were Mark's on-air eulogy for Rush the day he died, and his comments on the evening of January 6th as the "insurrection" was petering out:

You were one of the only public figures to point out the completely out of control hysterical outrage compared to the left-wing violence we were enduring. I then and there decided to join The Mark Steyn Club and have enjoyed supporting your brilliant perspective ever since.

Many more years of good health to you all!

Thank you, Joel. The willingness of so many in the "conservative" media to accept the left's framing was very striking, even by mid-afternoon that day.

We're grateful to everyone who tuned in to the Steyn Show last night. Despite massive inroads from the England/Wales World Cup draw, we managed to beat Sky and TalkTV, and were within a couple of thousand of the BBC until England roused themselves and started scoring goals.

Mark will be back for tomorrow's Steyn Show live at 8pm GMT/3pm North American Eastern - followed by the Thursday replay of Steyn's Song of the Week on Serenade Radio at 9pm GMT/4pm Eastern. You can listen to the latter from anywhere on the planet by clicking the button in the top right-hand corner here. Sunday's listeners seemed to think it was one of the best in the series, so don't miss it!

If you're a member of The Mark Steyn Club, feel free to weigh in below. If you're wondering what the Steyn Club's all about, you can find more details here - and we also have a great gift membership.