What Are You Doing the Rest of Your Life? with Carol Welsman and Russell Malone 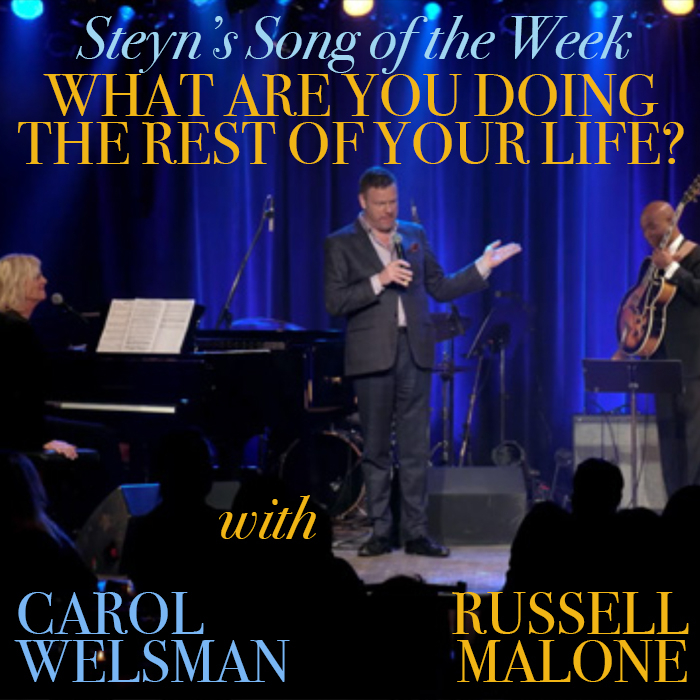 Earlier this month, a two-thirds-of-a-century songwriting partnership came to an end with the death of Marilyn Bergman. Marilyn and her husband Alan gave us, among many more, "The Windmills of Your Mind", "The Way We Were" and "Nice 'n' Easy". But here is another of their great songs, written with Michel Legrand and performed by two of our favorite guests - singer/pianist Carol Welsman and guitarist Russell Malone.

This special video Song of the Week was filmed just before the Covid killed live music for two years. It was recorded before an audience of Mark Steyn Club members in Montreal and, unless you were there on that day, you won't have seen it before. Mark explains a little about the song, but the real heavy lifting is done by Carol's reading of the Bergmans' lyric, which we offer in tribute to Marilyn and with condolences to Alan.

"What Are You Doing the Rest of Your Life?", music and lyrics by Michel Legrand and Alan and Marilyn Bergman

One benefit of Mark Steyn Club membership is that you can enjoy our content in your preferred medium. So, if you'd rather sample our Song of the Week in audio only, please log-in here.

~Carol was a big hit on our 2019 Christmas show, in the course of which she found herself talking backstage with another of Mark's guests, Randy Bachman of The Guess Who and Bachman-Turner Overdrive. Randy happened to mention a song of his he thought would rather suit Carol - and we're pleased to say it's now a track on her Latin CD Dance with Me.

~If you enjoy our Sunday Song of the Week, we now have an audio companion, every Sunday on Serenade Radio in the UK. You can listen to the show from anywhere on the planet by clicking the button in the top right corner here. It airs thrice a week:

As we always say, membership in The Mark Steyn Club isn't for everybody, and it doesn't affect access to Song of the Week and our other regular content, but one thing it does give you is commenter's privileges. Please stay on topic and don't include URLs, as the longer ones can wreak havoc with the formatting of the page. For more on the Club, see here - and don't forget our special Gift Membership.