Ain't That A Kick - Sammy Cahn All The Way 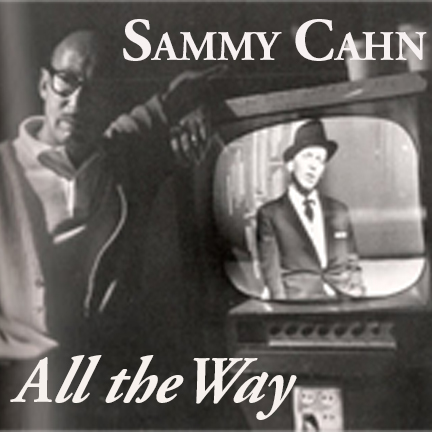 2015 is Frank Sinatra's centenary year, which necessitates a few modifications to SteynOnline's music, film and entertainment coverage. Our official observances commence tomorrow when our Song of the Week department becomes a Song of the Semi-Week in order to squeeze in 100 Sinatra songs of the century between now and December. Several other folk seem to have opted for this approach, too - our old friend the Pundette has launched a dedicated Sinatra Centenary site for that very purpose - so we hope you'll have lots of finicky fun nitpicking through competing hit parades and demanding to know why this or that song hasn't made the list.

Don't worry, we'll still make space for other musical content this year, not least because I need to come up with pretexts for plugging Goldfinger. And we'll also be looking at the various secondary strings to Sinatra's bow in our movie feature and other appropriate departments.

But, as a curtain-raiser for the New Year and Sinatra centenary year here's an encore presentation of a SteynOnline audio special originally aired two years ago to mark Sammy Cahn's hundredth birthday. Aside from being the fellow who introduced me to Frank, Sammy was a prodigious hitmaker and a prolific lyricist who put more words in Sinatra's mouth than any other songwriter.

In this special podcast, I celebrate the man who wrote "Come Fly With Me", "Teach Me Tonight", "The Tender Trap", "Let It Snow! Let It Snow! Let It Snow!", "All The Way", "Call Me Irresponsible", "My Kind Of Town (Chicago Is)", and many more enduring hits performed by everyone from Andy Kirk and his Twelve Clouds of Joy to Amy Winehouse, the Harry James band to the Irish boy band Westlife, via Dean Martin, Dinah Washington, Bing Crosby, Diana Krall, Marvin Gaye, Linda Ronstadt, Glen Campbell, Peggy Lee, Stevie Wonder, Dinah Shore, Sammy Davis Jr, Dianne Reeves, the Andrews Sisters, Michael Buble, Jessica Simpson - and, of course, lots and lots of Sinatra.

Along the way, we'll also hear some curiosities from the SteynOnline archives - Sammy Cahn's composing partner Jule Styne joins original cast member Donald Saddler to recreate the big song from Cahn's first Broadway show, and I'll take a crack at one of Sammy's first movie hits, and the theme tune to our Song of the Week, "I've Heard That Song Before". And we'll examine the two halves of Frank Sinatra's career to which Cahn made critical contributions - first, Jule Styne talks with me about the hits Cahn & Styne wrote for the bobbysoxers' hero in the 1940s, and then Sammy Cahn himself recalls his other composing partner, Jimmy Van Heusen, and the Cahn & Van Heusen songs that helped define the new swingin' Sinatra of the Fifties and Sixties.

In Part One, Sammy muses on his boyhood on the Lower East Side and his first big hit for the Lunceford band, Jule Styne recalls "It's Been A Long, Long Time" and other wartime songs, and talks about the early hits the team wrote for the young Sinatra. After the split with Styne, we explore the operatic end of Sammy Cahn, and the unlikely rhythm'n'blues side from Etta James to Chaka Khan. And we round things out with the first hit of an exciting new songwriting team for a reborn star, "The Tender Trap".

In Part Two, via a crackly telephone line, Sammy Cahn talks with me about his most productive writing partnership, with Jimmy Van Heusen. We'll hear many of his hits from the Sinatra golden age - "Come Fly With Me", "Come Dance With Me", "The Second Time Around" - and some of the wilder shores of the Frank and Sammy partnership, including their campaign song for John F Kennedy and a ring-a-ding rewrite of Simon & Garfunkel.

And join us Sunday night at SteynOnline as we begin our Sinatra century.