Of Coronations and Confiscations 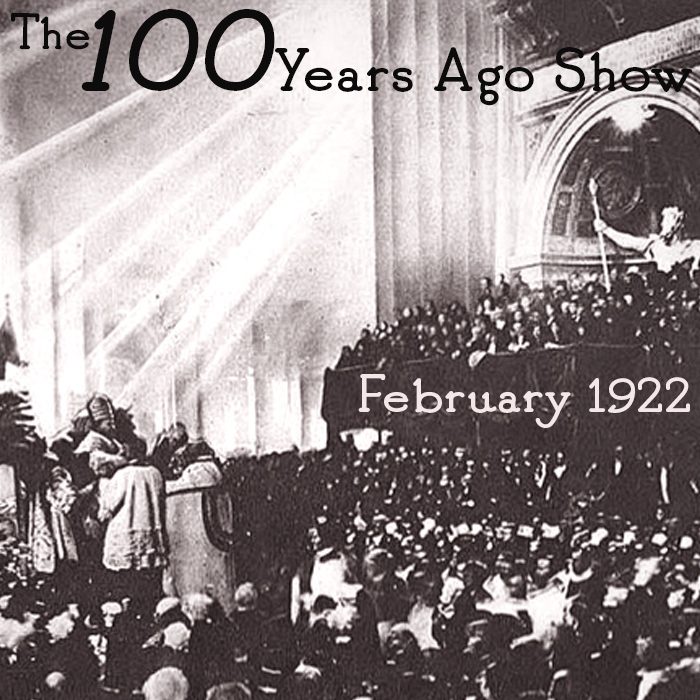 Programming note: If you missed today's audio episode of Steyn's Song of the Week on Serenade Radio, you can catch the re-run at 5.30am Monday GMT, which is 9.30pm Sunday on the North American West Coast and a pleasant Monday afternoon listen in Australia. Wherever you are on the planet, simply click the button at top right here.

Welcome to this month's anthology edition of The Hundred Years Ago Show. February 1922 sees both a Papal coronation and a Royal wedding, but the Communists are seizing religious artefacts to sell for famine relief as the ruble collapses. Peace frays in Ireland, and there are headline-making murders in Helsinki and Hollywood.

Plus: a new magazine in America, Reader's Digest; a new book in Paris, Ulysses; and a new secret police in Bolshevik Russia - and the sounds of Al Jolson, John McCormack and hitherto unheard Saint-Saëns. Click above to listen.

Thank you for all your kind comments on The Hundred Years Ago Show and other programming. Brian, a First Hour Founding Member of The Mark Steyn Club from Washington State, writes:

After listening to an abundance of Hundred Years Ago Shows, it belatedly dawned on me that my wife's and my late parents were all born in 1915-1919, the latter half of the prior decade.

Along with the historical 'big picture' comparisons, contrasts, and perspectives, these shows give me some insight into the world into which our parents were born. Talk about time traveling.

Thank you for that, Mark.

Thank you, Brian. This is indeed the world into which our parents - or grandparents, or great-grandparents - were born, as vivid to them as Covid and Facebook, Ukraine and hashtags are to us. And many of the problems that beset them bedevil us still a hundred years later. But there are also less freighted reports - of forgotten novelties and landmark inventions, of sporting and artistic triumphs, and the passing of the once famous. Oh, and plenty of period music - many songs that are still sung, but played in the versions that first made them hits.

The Hundred Years Ago Show started as a weekly feature of The Mark Steyn Show. It proved so popular that we now reprise it as a monthly omnibus version on the last Sunday of each month. And, as with our audio adventures, video poetry and musical specials, we've created a special Hundred Years Ago home page in handy Netflix-style tile format to enable you to set your time machine for the precise month you're in the mood for. We also have a tile-format page for The Mark Steyn Show, lest you should miss it on your telly every Monday to Thursday in primetime.