A Death in Exile 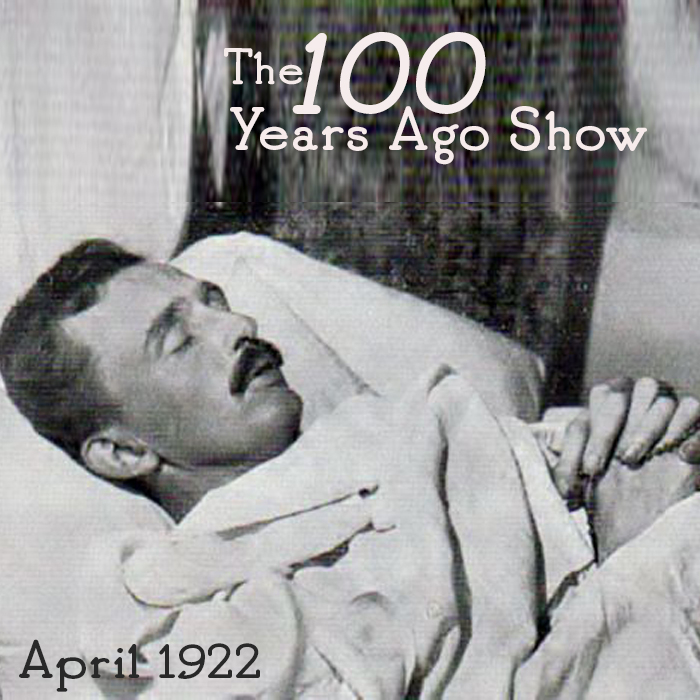 Programming note: If you missed today's audio episode of Steyn's Song of the Week on Serenade Radio, you can catch the re-run at 5.30am Monday British Summer Time, which is 9.30pm Sunday on the North American West Coast and a pleasant Monday afternoon listen in Australia. Wherever you are on the planet, simply click the button at top right here.

Welcome to this month's anthology edition of The Hundred Years Ago Show. April 1922 begins with the death of an emperor and ends with the death of a hardboiled pulp-fiction hack. In between comes a cavalcade of turbulent times - war in China, a bullet from a Ukrainian, the unraveling peace in Ireland, and a global confab in Italy with big plans for the world. Oh, and a corrupt Democrat party boss in San Francisco gets a drooling send-off from the press.

Plus: Sir Arthur Conan Doyle sees dead people, a tempest in a Wyoming teapot, Fatty Arbuckle's third trial, and Herr Rorschach's last test - all played out to the sounds of the era from Al Jolson, Eddie Cantor, the New York Philharmonic and more. Click above to listen.

Thank you for all your kind comments on The Hundred Years Ago Show. Kirk Scruton, a Carolina member of The Mark Steyn Club, writes:

2011 was the 150th 'anniversary' of the beginning of the American civil war, so I started a weekly exercise of learning what happened *that week* during the war. In 2014, that war seemed pretty settled, so I switched to 100 years ago that week for the Great War. Then in 2018 I quickly reviewed the interwar years so that in 2019 I could follow World War II. It's an approach I highly recommend. I'm going to start the Punic Wars after WWII ends and see if I can outlive Rome.

My point is that this approach that Mark is taking makes developments vivid, partly because he is telling them and partly because we get at least a little bit of the sense of time, something entirely missing from a text book approach.

Thank you, Mark, for giving me resources to keep the modern constantly transitioning age in context. I hope we eventually get our bearings, because the way the planet is spinning both makes everybody dizzy and drives more and more people to the margins. Maybe, like an ice skater, we can find something to keep our eyes on, but until then it looks like more and more desperation.

Thank you, Kirk. You're exactly right about the advantages of this format, and in particular the sense it gives of the connections week by week: Did that kerfuffle in some part of the world I'm not terribly interested in have some knock-on effect right here in town a month later? I also like the pre-echoes of what you call our own dizzying times.

The Hundred Years Ago Show started as a weekly feature of The Mark Steyn Show. It proved so popular that we now reprise it as a stand-alone omnibus version on the last Sunday of each month. And, as with our audio adventures, video poetry and musical specials, we've created a special Hundred Years Ago home page in handy Netflix-style tile format to enable you to set your time machine for the precise month you're in the mood for. We also have a tile-format page for The Mark Steyn Show, lest you should miss it on your telly every Monday to Thursday in primetime.