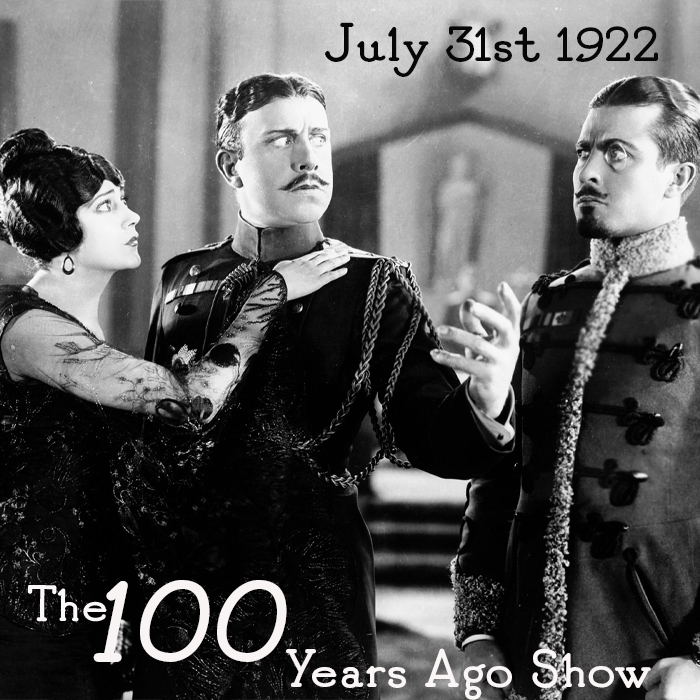 Programming note: There will be a special edition of The Mark Steyn Weekend Show here at SteynOnline later today.

Welcome to this week's Hundred Years Ago Show. July 1922 comes to a close with intensifying battles in the Irish civil war, and the German mark sinking to new lows on the currency markets. In Italy the Fascists have a good week, and in Italy's colonies the Emir of Cyrenaica gets offered an upgrade. In New York apple pie à la mode now comes with arsenic, and in Boston George M Cohan looks like he has another smash hit...

Plus all the other headlines from Stadelheim to Smackover - and the sounds of the era from Marilyn Miller to John McCormack. Click above to listen.

As Mark mentions in today's show, the big screen hit of the month was the third adaptation within a decade of The Prisoner of Zenda. If you'd rather hear the original, Steyn reads it here - and don't forget his own contemporary inversion of the tale, The Prisoner of Windsor.

The Hundred Years Ago Show began in the first few weeks of lockdown as an occasional feature on the audio edition of The Mark Steyn Show. It proved so popular that it's now a stand-alone show every Sunday at around this time. Last week's edition went down especially well. Elisa Angel, a First Month Founding Member of The Mark Steyn Club, writes from Alabama:

I love this show. I know we're supposed to see the terrible connections to today's news and maybe cringe some, but I just love it. The music was particularly good today. 'Daisy Bell (Bicycle Built for Two)' was new today, right? Great show.

Jack Skiffle, a Los Angeles Steyn Clubber, was also taken by the tunes:

"Oogie Oogie Wa Wa" will do that to you.