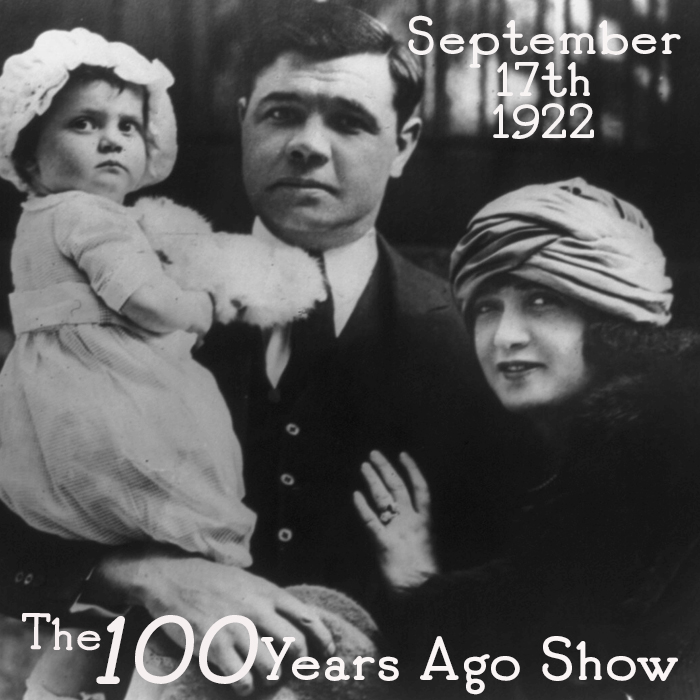 Programming note: Tomorrow Mark will have another entry to his anthology of Sunday Poems - because, as he always says, video poetry is where the big bucks are.

Welcome to this week's Hundred Years Ago Show. September 1922 continues with a massacre of Greeks and a double-murder in New Jersey that would enthral the American press for months. And, on the streets of New York, Mr and Mrs Babe Ruth are seen with a wee babe...

Also: A question very relevant for at least two presidential candidates in the twenty-first century. Can an American woman have an independent citizenship that can be passed to her children irrespective of the foreignness of her husband?

Plus all the other headlines from Amman to Arcadia - and the sounds of the era from George Gershwin to Billy Murray. Click above to listen.

The Hundred Years Ago Show began in the first few weeks of lockdown as an occasional feature on The Mark Steyn Show. It proved so popular that it's now a stand-alone show every weekend - with plenty of lessons for our own time. Thank you, as always, for your kind comments about this part of our programming. Simon Arnold, a Mark Steyn Club member from the very northern tip of Scotland, writes of last week's show:

It could be yesterday or today nothing really seems to change. The wonderful music of that era underlines the way things were at the time. The only change was technology giving us better tyres, cars and planes that could go faster and travel further. The changes of elites in Greece remind me of this week as we have witnessed a new PM, and a new King. The temperatures and strikes are still as relevant then, as they are today. A great show that really educates me about things I never knew about. History is important because it frames the present in the context of understanding where we have been and where we are heading in the journey of time.

Indeed, Simon. As Mark often says, over a hundred years later we are still basically tinkering at the edges with the great breakthroughs of the late nineteenth century - planes, cars, telephones, etc.

Tim Neilson, a First Weekend Founding Member from Victoria, was particularly struck by a namecheck in passing in last week's Melburnian news item:

You frequently say that the world is still sorting out the mess created by WWI, and one of the more obscure (at the time) snippets from this show goes a long way to justifying that idea - no doubt why you plucked it out from the minutiae of the time.

Although if the descendants can't find some way to get an audience back from some niche Canadian, maybe their influence won't last much longer...

We very much doubt whether Sir Keith would have made the disastrous $60-million signing his son did, Tim.

As with our audio adventures, video poetry and musical specials, we've created a special Hundred Years Ago home page in handy Netflix-style tile format to enable you to set your time machine for the precise week or month you're in the mood for.