Fascism on the March! 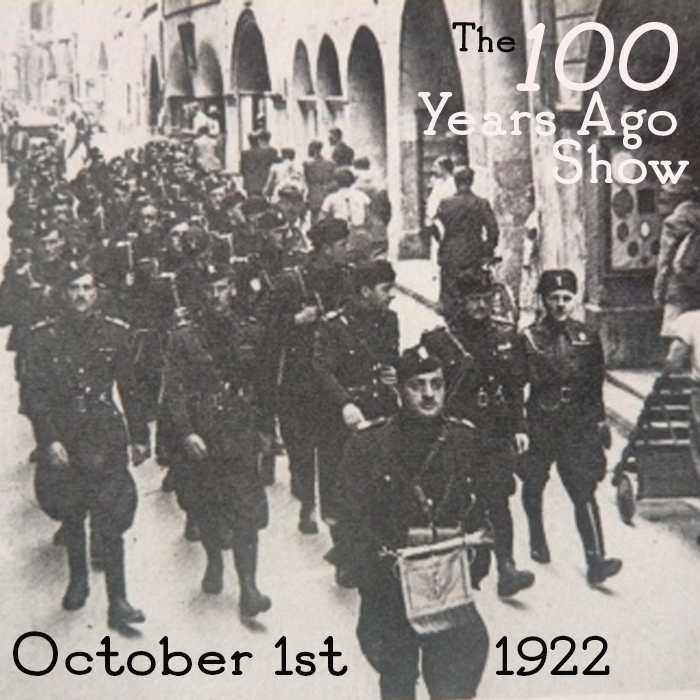 Programming note: A new week of The Mark Steyn Show begins Monday on GB News at 8pm British Summer Time, which is 3pm North American Eastern or 12 noon for a West Coast lunchtime listen. Wherever you are on the planet, you can watch the show live right here.

Apologies for the slight delay in posting, but welcome to this week's Hundred Years Ago Show. October 1922 begins with Fascists on the streets of Italy, a military call-up in Russia, and a currency collapse in Germany. Across the Atlantic, America's first female senator shatters the glass ceiling (sort of), and America's first female cross-country flyer flies from San Francisco to New York (sort of).

Plus all the other headlines from New Zealand to North Cobalt - and the sounds of the era from Billy Jones to Marie Lloyd. Click above to listen.

The Hundred Years Ago Show began in the first few weeks of lockdown as an occasional feature on The Mark Steyn Show. It proved so popular that it's now a stand-alone show every weekend - with plenty of lessons for our own time. Thank you for your kind comments on the programme. The significance of a very minor item on last week's show caught the eye of Veronica, an Auckland member of The Mark Steyn Club:

Sometimes I like to read ahead a little on The 100 Years Ago Show (or should I say read backwards?) but, alas, I do not have Mark's forensic eye for detail - the death of the relatively obscure 6th Earl Spencer failed to catch my eye, as it should have, considering that his great-great grandson is now the heir to the throne. Probably not an eventuality the 6th Earl ever foresaw and definitely a step up from being Lord Lieutenant of Northamptonshire (not that there's anything wrong with that).

It is extraordinary with what apparent ease the ex-Kaiser picked up the threads of his life after presiding over, some would say causing, so much needless death and destruction across Europe - a comfortable exile in the Netherlands, a second marriage, an international book deal. The newspapers Mark mentioned as serialising his memoirs were all US publications so, I presume, 'William Hohenzollern' retained a level of popularity amongst the German-American citizenry. Amazing when you think about it.

Indeed, Veronica. But then, were Joe Biden's nuclear brinksmanship to usher in the apocalypse, I don't think he'd have any difficulty getting a serialisation deal with The New York Times.

Incidentally, as with our audio adventures, video poetry and musical specials, we've created a special Hundred Years Ago home page in handy Netflix-style tile format to enable you to set your time machine for the precise week or month you're in the mood for.