The Kids Are Alright

For about 36 hours there, my heart was hooked up to Twitter by a Pavlovian on/off switch. I'd see "The WHO" (click!) then realize, sadly, that whoeveritwas just meant the World Health Organization (cluck) and not the band. So annoying.

Being a writer means I'm normally the annoyer rather than the annoyed, although predicting precisely what will provoke readers defies algorithmic domestication. Having written hundreds of thousands of words insulting every race and religion, my most "controversial" piece, judging by the resulting "Great Wave Off Kanagawa" blowback, was called "The Who Is Better Than That Stupid Band You Like."

I'm not (quite) saying the Who are better than the Beatles — Tim Sommer makes that seemingly perverse case with daunting erudition — but I was born in 1964 so I've heard all the Beatles I'll ever want or need to, ever ever ever again, thanks bye. It's not their fault I'm sick of them, any more than it's penicillin's fault that I'm allergic.

And anyhow, why compare Apple Records to oranges? As Pete Townshend said snottily (but I repeat myself) about the Fab Four, "They were more a pop group." Revealingly, Townshend warmed to his musical rivals only after they released "Day Tripper" and "Paperback Writer" two years into Beatlemania:

Freud called "love and work" "the cornerstones of our humanness," yet too many artists have chiseled endlessly away (and often cynically) at the former at the expense of the latter, leaving the rest of us living in crooked cultural domicile.

(Perhaps Jung would have added "stuff about fairies and elves" to this foundational list, in which case I'd have to reluctantly credit Led Zeppelin, but he didn't, so I can continue to be bored silly by them as well.)

The Who rarely recorded "love songs" as we generally understand them, with Townshend declaring — and do bear in mind that Pete declares an awful lot of things — that every one of his "love songs" is really about God. (His solo hit, "Let My Love Open the Door," for instance, is meant to evoke "listening in while Jesus sings.")

No wonder we punks deemed the Who the only acceptable "dinosaur" band. Love and sex were yucky, hippie things. "Jobs, creativity" though? That's the punk DIY ethos right there.

Now add a reflexive suspicion of mainstream politics, an anarchic sense of humor — the Stones aren't funny, they're smirky; The Doors? Pink Floyd? Zep again? They're Easter Island moai with guitars — then fold in the ever-present suspicion that apocalypse loomed even closer after the damned hippies had spread their "peace and love" guff (along with venereal disease) around the globe while we were just kids.

Only the Who proffered us an older brother's wisdom: Trust no one.

There's nothing in the streets
Looks any different to me
And the slogans are replaced, by-the-bye
And the parting on the left
Is now parting on the right
And the beards have all grown longer overnight

Meet the new boss
Same as the old boss

"If I feel physically as if the top of my head were taken off, I know that is poetry," Emily Dickinson said. That was the effect watching that rather roughshod documentary about the Who had on me when I saw it at the Broadway in Grade Nine.

The first scene, in particular, was a felicitous choice:

It was 1967, and the show was The Smothers Brothers Comedy Hour, whose titular twits were your typical self-important 1960s show biz liberal, "anti-establishment" blowhards. The guy on stage with the Who, Tommy Smothers, is a particularly vicious human toothache of long standing.

The Who had considerable, nasty fun at Smothers' expense, treating this "radical" hipster with far more naked contempt than they did any straight-laced mainstream hosts they've ever appeared with.

Brocade and buckskin and Botticelli curls be damned. I was in love.

The Kids Are Alright was "written and directed by Jeff Stein," except it has no narration, no linear (or even non-linear) narrative, and zero historical context of the "'This Is The End'-played-over-Vietnam-War-footage" variety typical of Boomer music docs.

Instead, interspersed with historical and newly-shot full-length musical performances are multiple (of course) declarations by Pete, who, being asked far too often why he smashes his guitars, blurts out bratty wind-ups about things he claims to hate: The Beatles; his own songs, musicianship and stage craft; the record business; Woodstock and all its pomps and works; the "geezers" who comprise their own punters; and — as some might have guessed — the other members of the Who.

Plus lots of random bits like this, strung together, some only a few seconds long.

It's not just not a hagiography — it's barely a "-graphy," period. So basically, The Kids Are Alright is the second most "punk" documentary ever, next down from D.O.A.

The film was remastered in 2003 and, while they went for widescreen format rather than letterbox for some (horrible) reason, the resulting double DVD is considered one of the best of its kind, with almost too many extras. The feature explaining the movie's restoration is interesting even if you don't care much about the band.

If you'd prefer a more informative, traditional documentary about the Who, 2007's Amazing Journey, has the obvious advantage that there's now more sheer story to tell: the Cincinnati tragedy, and of course, the deaths of Keith Moon and John Entwistle. Pete and Roger have matured in the interim, and their hearts-on-their-sleeves interviews are candid and self-deprecating.

Amazing Journey is worth it for the Sex Pistols' Steve Jones (barely) summoning his always-limited energy to offer an opinion of the Tommy movie ("A bit pants, innit?"), and the sequence about the Who's instant-classic performance at the post-9/11 Concert for New York City. If the expressions of naked joy and anguish on the faces of those first responders in the audience don't quicken your pulse, please seek help immediately.

The ultimate Who documentary likely won't be made until both surviving members (the Two) die. Ideally it will combine the best of both docs, and touch on the Two's Kennedy Center Honors and Teen Cancer work; interviews with lifelong fans like Irish Jack, instrument techs, and especially articulate and chatty tour mates, like the Hermits' Peter Noone, and Mick Jones of the Clash; and point out the rather big deal that Townshend invented the "unplugged" subgenre in 1979, ten years before the idea occurred to MTV.

I look forward to watching it. I've only seen the world's greatest live band on a screen, having chickened out on a half-a-chance to see them in Buffalo on their first farewell tour.

And I've never had much desire to attend their concerts, however close to home, whatever the lineup. The Who already live inside my head, hermetically sealed, where they will always be alive, always perfect.

Mark Steyn Club members can let Kathy know what they think in the comments. If you want to join in on the fun, make sure to sign up for a membership for you or a loved one. To meet many of your fellow club members in person, join Mark along with Conrad Black, Michele Bachmann and several others aboard our upcoming Mark Steyn Cruise down the Mediterranean. 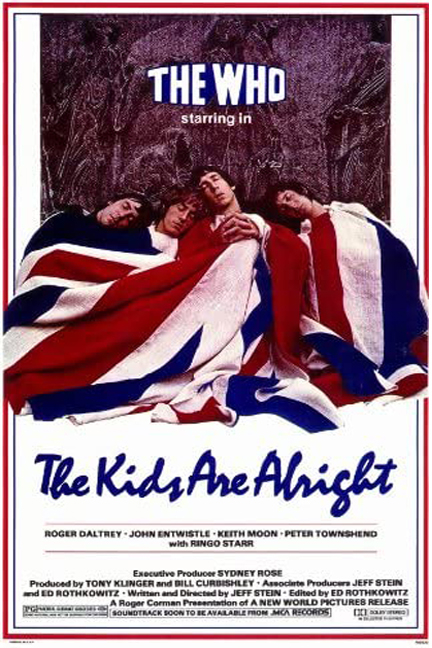