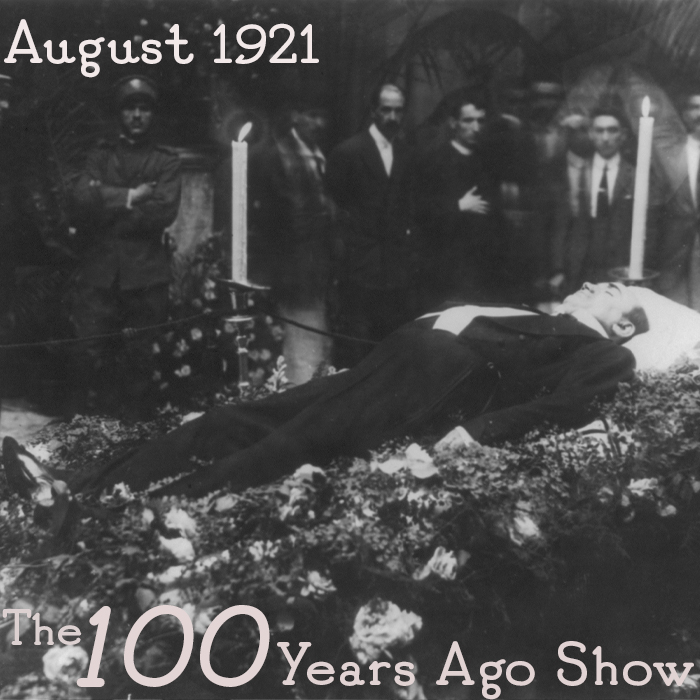 In Mark's August edition of The Hundred Years Ago Show, the voice of the century is no more; peace breaks out between the United States and Germany; a European army is humiliated by Islamic tribesmen; an American governor is headed to the slammer; and a king ascends the throne in the appendicitis ward.

Plus: Boozing with Bolsheviks; a bigshot Democrat mysteriously stricken; transmitting printed documents by telegraph; and no need to be taken out to the ball game. Click above to listen.

The Hundred Years Ago Show is not exactly an escape from today's hell: As you know, Mark has long held that many of the problems that beset us arise from the years after the Great War. Thus many of the news stories of 1921 are reflected indirectly in the headlines ten decades later. As America's Afghan policy comes crashing down in ruins, for example, we reported just last month on where it all began:

When Princess Fatima of the Afghan royal family arrived in Washington, she was anxious to be received at the White House by President Harding. His Britannic Majesty's ambassador, Lord Hardinge, was most disturbed by this, and protested to the State Department that Afghanistan was within the British sphere of influence and it was not appropriate for the White House to go around throwing official receptions for emissaries of that country as if it had the right to conduct foreign relations.

The State Department agreed, pointing out that America was so uninterested in Afghanistan they didn't even have a file on the country.

Lord Hardinge thought everything was hunky-dory, and then he woke up to find the newspapers full of photographs of President Harding receiving Princess Fatima, erroneously described as the Sultana of Afghanistan. The press accounts are full of puzzling details: Her Royal Highness was accompanied by someone styled the 'State Department Naval Liaison Officer', a position that does not appear to exist, and by a second man representing himself as the Crown Prince of Egypt, even though he was no such thing. Princess Fatima herself, although perfectly fluent in English, having been educated in India and Britain, told President Harding she did not speak his language and insisted on talking to him through an interpreter, apparently to make herself seem more important.

The State Department has now been forced to open a file on Afghanistan.

History repeats itself, although in this instance inverting the usual order: first farce, then tragedy.

There are many such echoes on today's show, but also less freighted reports - of forgotten novelties and landmark inventions, of sporting and artistic triumphs, and the passing of the once famous.

The Hundred Years Ago Show started as a weekly feature of The Mark Steyn Show with Mark's "world news update" accompanied by some appropriate musical sounds from a century ago. It proved so popular that we now reprise it as a monthly omnibus version on the last Sunday of each month. And, as with our audio adventures, video poetry and musical specials, we've created a special Hundred Years Ago home page in handy Netflix-style tile format to enable you to set your time machine for the precise month you're in the mood for.

Steyn will be back later today with his (essay-version) Song of the Week. We hope you'll join him.